Earlier this month, Mike Gershon -- who was an impressive, hard-hitting defenseman for the Golden Eagles -- signed a contract with the Wheeling Nailers of the ECHL. Here is the Nailers official release...

WHEELING,WV - The Wheeling Nailers, the AA affiliate of the Pittsburgh Penguins, have added to their roster with the announcement that they have signed defenseman Mike Gershon for the 2010-2011 season.

The Nailers have now officially announced the signings of three players so far including center Kris Vernarsky and returning defenseman Kyle Bushee.

Gershon is a 5'10" native of Sparta, NJ who played for Coach Drulia last year with his team in Port Huron, Mich. of the IHL. Gershon scored 7 goals and 28 assists while recording 75 penalty minutes in his professional rookie season.

"Mike is one of those kids that is going to get better every day. He is serious about his game, and prepares like a real pro" said head coach Stan Drulia.

The 25 year old Gershon played for Division 3 State University of New York at Brockport from 2005-2009. His senior season with the SUNY-Brockport program he was named to the All-SUNY Athletic Conference second team as he scored 8 goals and 9 assists. His career with the Golden Eagles was highlighted by a hat trick on November 7, 2008 against SUNY-Genesco.

Gershon will be the first product of SUNY-Brockport to play for Wheeling. The most notable SUNY player in Wheeling history was Brendon Hodge out of SUNY-Plattsburgh who starred for the Nailers for three seasons from 2003-06.

On Friday 1,065 freshmen will be moving in at Brockport. It's the biggest incoming class in 25 years.

As in years past, the hockey team will be good campus citizens and they will help the students and parents move-in, lending a hand in getting the heavy stuff and personal affects into dorm rooms.

TREMBLAY PREPARES FOR THE SEASON

One of the best stories of personal triumph in DIII hockey is Ray Tremblay's career.
After having fractured two bones in his spine during the Christmas holiday a few years back, he was given 2 choices. One was surgery that would certainly end his career. The other was a combination of a back brace, months of immobility and many more months of rehab (which would in itself end most hockey careers). Ray chose hockey, dealt with the pain and busted his butt to get back to good health.

Since then he has performed at a high level. This season will mark his second as the Golden Eagles' assistant captain. Last season was a great one...a versatile forward who plays a great defensive game, he's also a play-maker as made evident by his 19 assists (a team high) and 25 points (second best on the team). 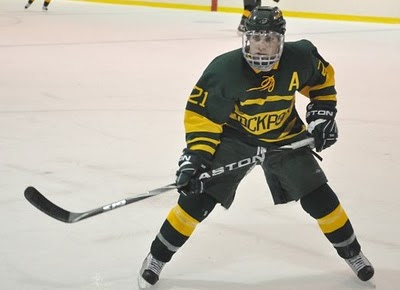 This season he's looking to take it up another notch. He has had an outstanding summer of training. He trains with Crash Conditioning, arguably one of the best hockey specific training program in the world. They have facilities in Calgary, Alberta and Kelowna B.C, and train some of the elite players in the world like Norris Trophy winner Duncan Keith, Washington Capitals' Mike Green, Edmonton's Jordan Eberle, and Carolina's Zach Boychuk to name a few.

Ray works with the Kelowna Pro Group, with players like Cody Franson from the Nashville Predators, Ty Wishart and Scott Jackson from the Tampa Bay Lightning.

Ray was featured in a video that was shot at Crash Conditioning Kelowna.

Here is the link: http://dcdproductions.ca/nevin/Crash_Conditioning/cc_webdload.html

To find out more about Crash Conditioning check out their site www.crashconditioning.com

O'MALLEY TRIES OUT WITH THE HAVOC

The Huntsville Havoc of the SPHL (Southern Professional Hockey League) announced yesterday that they signed Brockport standout Sean O’Malley to a tryout agreement. O’Malley spent four seasons at Brockport where he scored 31 goals and added 38 assists in 99 career games. Last year he scored a career high 11 goals which included an OT game-winner against Morrisville and MVP accolades in the Skidmore tournament.
For info about the Havoc, go here:

The Oswego Atheltics Department issued this news release earlier in the week...

While at Brockport, Digby worked directly with Golden Eagle defensive and power-play units that saw statistical improvements and developed in-season and summer strength and conditioning programs. The G. Ray Bodley High School (Fulton, N.Y.) graduate aided the development of practice plans through the analysis of game and practice video footage. He created successful marketing strategies to attract fans to Brockport ice hockey games. Digby has also served as the advertising coordinator for the Brockport Athletic Department since 2008.

During the off-season, Digby has worked as an instructor at the Hamilton College Hockey School for three summers and the Maksymum Hockey School in Rochester for five summers.

One of Brockport's offseason pick-ups was Steve Sachman, who played for the New York Bobcats of the AJHL the past two seasons. The 5'11", 185-pounder was a two-time AJHL All-Star. In 126 games for the Bobcats, including two National Championship appearances, Stephen scored 63 goals and 53 assists for a total of 116 points, the most for any Bobcat during that period. Most impressive among his stats was his 15 game-winning goals over those two seasons...amazing!

I recently interviewed Steve for BrockportHockey.com... 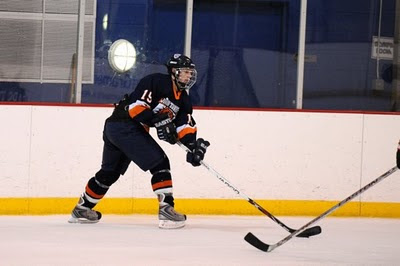 
I started playing hockey at 5 - just roller hockey - and I got into ice hockey around 8 years old, I guess. I played travel hockey for Suffolk PAL until U16 when I went to play for the Long Island Royals. After one year in U16 I played a year of Junior "B" for the Royals and won a national championship with them. It was the Royals first year hosting a junior team since 1991. Since then I've played two seasons of Junior "A" for the New York Bobcats.

You put up some really impressive numbers with the Bobcats (63 goals over the past two seasons). How would you describe your style of play and what are your greatest strengths?


Well, since I was young I always loved to score goals and big goals, so thats what I've been told is my biggest strength. Although I didn't kill penalties much with the Bobcats I always excelled with them up until then.

The Bobcats were awesome last year, an unbelievable 37-3-2. What did you learn from that success and how do you think it will work at Brockport and in NCAA DIII?


For some reason throughout my youth and junior career I've always been on winning team, so I would say that I know how to win and that I'll do whatever it takes to win. I'm hoping to bring the success I've had in the past to Brockport and win big.

Athletically and academically, what attracted you to Brockport?

When we came up to visit Brockport and hung out with the team I noticed how close the team was and I really like that. Also, I loved the fact that they had a nice rink to play in and got a lot of people at their games.

Academically, I've been told by many teachers in high school how good of a school Brockport was and I liked that the student body was a little bit larger than that of my high school.

What will you be studying in the classroom?

I haven't decided yet on what I'm going to study at Brockport. I'm choosing between business administration, accounting, or being a math teacher.

Who is your all-time favorite NHL player?

Mark Digby, who spent 4 seasons as Brockport's assistant coach after a swell 4 year career on the ice for Brockport, is moving on.

The likable fellow, who is well-respected by players and fans alike, is taking on the assistant coaching role at Oswego.

Although it is a real downer to see him go, I am very happy for him. He is moving to a program that year-in, year-out is among the best of the best in Division III.

Digby provided many memorable moments for the program. He scored 41 goals and recorded 43 assists for 84 points in 96 career games and was the team captain his junior (03-04) and senior seasons (04-05). He was selected to SUNYAC All-Conference Team in 2004-05 and named SUNYAC Player of the Week three times throughout that season in which he scored a stellar 19 goals.

Coach Dickinson and the Athletic Department are currently looking for a replacement. To some, it may seem a little late in the off-season to be looking. But, fear not: Brockport's recent success and this year's great recruiting class will make the College a great destination for anyone looking for an assistant coaching position.