One of the days that Brockport hockey fans look forward to every year is the release of the schedule for the upcoming season. It gives them a chance to mark their calendars, plan their road trips, and get excited about the promise that comes with every season.

2016-2017 is another exceptional slate of games. Once again, the team is following the "max attendance" model; that is, scheduling 1 home game per weekend so as to maximize fan turnout -- sometimes, 2 games per weekend can be tough for fans. Counting the green and white game, there are 9 stand alone home games and there are another 4 games total that occur as Friday/Saturday home affairs.

Here are what I would consider the five "can't miss" home games this year:

Oswego on November 4th: It's the home opener...which is like Christmas morning to hockey fans

Buffalo State on December 2nd: The Bengals and Golden Eagles have shared some bad blood in recent years so this game promises to be chock full of hard hits and chippy play

Geneseo on February 3rd: It's Geneseo...need I say more

Plattsburgh on February 18th: The last game of the regular season...Plattsburgh and Brockport could be jockeying for playoff positioning. It promises to be hard fought 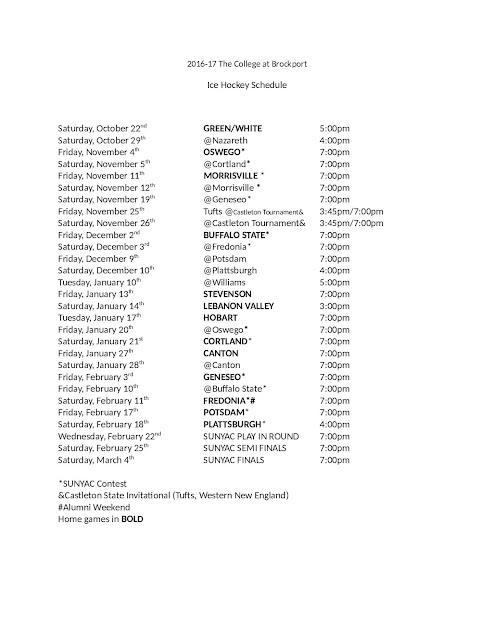 Mike Mondoux, who played for Brockport in the 1997-1998 and 1998-1999 seasons (and was a one-time SUNYAC Rookie of the Week), has secured a new role with the Corpus Christi IceRays becoming their Director of Scouting and Player Development.

Here is the report from JuniorHockey.com:

The folks at D3Hockey.com are reporting that the NCAA Hockey Rules Committee has proposed some changes to overtime that could hopefully eliminate ties in regular season play.

You can read their report here:

GOLDEN EAGLES EXCEL IN THE CLASSROOM

The Brockport Golden Eagles performed exceptionally well on the ice this past season. And, more importantly, they did the same in the classroom. Check out these absolutely outstanding academic accomplishments.