We have 12 home games this year, 13 if you count a preseason exhibition affair.

ALL of the games are "must see", but if I had to narrow it down to a handful of home games that you shouldn't miss, here they are:

Saturday November 3rd: It's the home opener against Fredonia. The inaugural game of each season is chock full of energy and the seats are usually full. After being hockey-free for nine-and-a-half-months, we need it!

Saturday, December 8th: This is a non-conference game against Anna Maria College. It should be interesting -- this will be Anna Maria's first season ever.

Friday, January 25th: Brockport hosts Postdam. The Bears are evenly matched with Brockport, so this will be a hard-fought battle, especially with the second semester playoff push underway.

Saturday, January 26th: After decades of Plattsburgh dominating Brockport, the Golden eagles have turned the tables on them in recent seasons. Let's see if that trend continues.

Friday, February 15th: It's the regular season finale...and who better an opponent than our biggest rival, Geneseo! 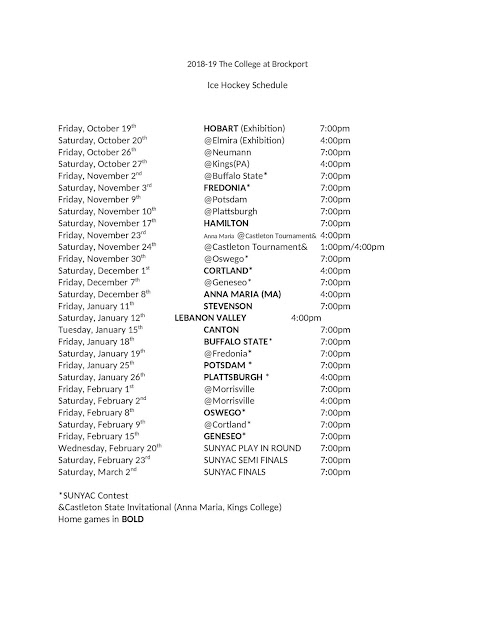 The College at Brockport athletic department announced a host of construction projects that are set to kick off the summer of 2018. The upgrades will improve the appearance of the Brockport Athletic Facilities as well as enhance the student-athlete and fan experience.

One remodeling project will improve the hockey experience.

The Tuttle North Ice Arena has seen completed demolition in order to begin the installation of new bleachers. Underneath those bleachers, there will be new team rooms, providing more control of the ice rink. The goal for a timeline for the project is to have the renovations completed early summer, so that community groups can continue to enjoy the facility prior to the Golden Eagles 2018-19 Ice Hockey season.