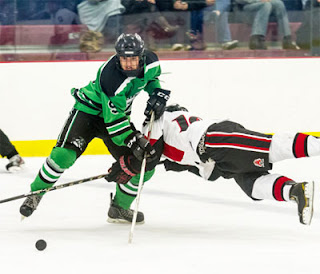 Jeremy Solat has committed to play hockey at Brockport for the 2017-2018 season. The 5'9", 170-pound forward hails from Centennial, Colorado and spent this season with the Syracuse Stars of the USPHL where he sported a 9-22-31 line in 45 games. He excelled in this season's playoffs, scoring a goal and getting 5 assists in 6 games. Prior to this season, he was with the Islanders Hockey Club and the Bay State Breakers. 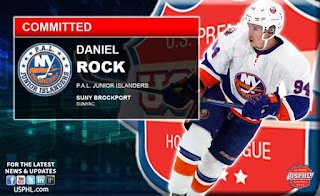 The PAL Jr. Islanders are proud to announce that Premier forward Dan Rock has committed to play and attend school at SUNY Brockport beginning in the fall of 2017.

Rock, ’96, finished the season with 14 goals and eight assists for 22 points in 40 games played for the blue and orange.

“I'm very thankful to commit to Brockport. My support system throughout my whole hockey career has been great and without them none of this would be possible. I learned so much from Coach Marshall and Coach Dineen and the whole PAL organization is a great organization for junior hockey players,” Rock said. “I was very lucky to be on a team with such a great group of guys because it made coming to the rink fun and I always wanted to work hard with my teammates and for them".

“When I go to Brockport, every inch will have to be earned like anything else in this sport and I look forward to the opportunity to compete at the NCAA level,” he added.

SUNY-Brockport competes in the NCAA Division III SUNYAC and is coached by Brian Dickinson, who is in his 20th season.

“We are happy for Dan and his family. He worked extremely hard during his time in here to achieve his dream of playing NCAA hockey. He will be a very productive college hockey player. We look forward to following Dan as soon as he begins his college hockey career at Brockport,” said Head Coach, Dan Marshall.

Brockport has two on All-Rookie Team

On Friday, USCHO.com announced their SUNYAC All-Rookie Team, which is pulled together by input from the conference's coaches.

Forward Connor Hutchins made the team thanks to his 12-15-27 line which featured 8 power play goals and 2 game winners. Goalie Matt Schneider was also selected thanks to his .903 save percentage and 3.02 goals against average.

These men excelled in conference play and that's what really caught the attention of the league's coaches -- in SUNYAC games, Hutchins scored 9 of his goals and Schneider's GAA dropped to 2.70.

Stylus looks at the end of the season

Alison Maurer of the Brockport Stylus looks at the Geneseo game and the end of the season...