Unger's primary duties will include recruiting, breaking down and analyzing game video and working with both Brockport's goalies and defenseman.

“I am excited to have a coach of Nick's caliber joining our staff,” said Dickinson, who enters his 15th season leading the Green and Gold.

“Nick's ability to identify quality student-athletes as well his experience coaching both goalies and defenseman will be a valuable asset to our program. Being experienced in recruiting is also a big plus.”

Before coming to Brockport, Unger served as an assistant hockey coach at Nichols from Jan. 2008 through the 2010-11 season. While serving as an assistant coach, Unger was the team's head recruiter and scouted potential players in assorted hockey organizations. During games, Unger was responsible for running the defensive end of the bench.

Unger graduated from Nichols in 2008 with a Bachelor's degree in Business Administration, and a concentration in sport management.

Mike Gershon, who graduated from Brockport a couple of years ago and was a hard-hitting blueliner, has a new gig as reported by the Western States Hockey League...


The New Mexico Renegades are excited to announce the hiring of Head Coach and General Manager Michael Gershon. Michael Gershon comes to New Mexico after a career ending injury in the ECHL playing for the Wheeling Nailers.

As well as finishing an internship with the New York Rangers, Coach Gershon also played four years of NCAA college hockey for Brockport (SUNYAC) where he was 2nd Team All – Conference. Coach Gershon acquired his Bachelor’s degree in Communications during his four years at Brockport.

Coach Gershon looks forward to taking the lead role of the New Mexico Renegades and also working closely with the local youth hockey organizations to help develop and promote hockey in the New Mexico region.

Coach Gershon will be relocating from New Jersey with his fiancé Keri and their English Bulldog Hennessy.

Brockport's capatin of the past two season -- Justin Noble -- has signed with the Invicta Dynamos of the United Kingdom for the 2011/2012 season.

Here's the official report from the Dynamos...

Justin Noble first caught the eye as a 16 year old in the Ontario Provincial Junior Hockey League (OPJHL) as a promising youngster icing for his home team, the Georgetown Raiders, in 2004/05. After spending the first half of the year with Georgetown the forward then switched to the Thornhill Thunderbirds before moving into the Mid-Western Junior Hockey League (MWJHL) the following term. Here Noble featured 93 times for the Guelph Dominators, notched 40 goals and tallied 44 assists for a total of 84 points. In 2007/08 the skater then began a four year enrolment at The College at Brockport and his hockey career continued as he featured for the university’s team in the NCAA III for the duration of his course. Following his debut campaign he scooped the ‘Most Improved Player’ Award, after picking up four points in 17 outings as he looked to establish himself in the team, and he then went on to become an increasingly valuable asset for Brockport year on year. In 2008/09 six goals and nine assists gave him a tally of 15 points from 24 fixtures before his committed displays earned him the ‘C’ of captain from 2009/10 onwards. Leading from the front Noble managed 19 points in his first year in charge before, last season, tallying another 16 in 25 games. On his graduation at the end of 2010/11 the forward then received a special Coach’s Award in recognition of his efforts in the green and white of Brockport and now the skater is looking to explore new horizons as he brings his game across the pond and into the ENIHL South with the Invicta Dynamos.

Speaking on his impending trip across the Atlantic latest signing Justin Noble revealed that he was relishing the prospect of testing himself in a new environment and that he was eagerly anticipating the first puck drop in early September. Noble said, “After hearing about the setup in Gillingham, with both the management and the passionate supporters, it was an easy decision for me to sign for the Dynamos. The team looks to have the potential to challenge this season and I am very excited to be a part of it and just can’t wait for it all to get underway”. Noble then added that he would be doing all he could to help bring silverware back to Kent when he said, “Having spoken with Kevin Parrish the goal this year is to once again be up at the top challenging for honours and I am looking forward to doing my part for the club and hopefully making that a reality”.

Meanwhile Justin Nobles’ latest Head Coach described his most recent recruit as the perfect fit for his new look side and suggested his acquisition was already raring to get started. Speaking on Noble Kevin Parrish said, “Justin’s game is exactly suited to what I’m looking for at the Dynamos this season. He is an up-and-down two way player that puts in the hard graft but he also has the talent to cause teams major problems at this level”. The coach then suggested that Noble would be as valuable an asset off the ice as he would be on it when he added, “Justin is straight out of college hockey where he has been leading from the front as captain for the past two seasons and his character and leadership qualities will undoubtedly help in the changing room. He has done well in the NCAA III and I am very excited about working with him over the 2011/12 campaign”.

5ft 11in Justin Noble will wear shirt number 14 for the Dynamos when the new campaign gets underway and the left hander is one of two new non-EIHA trained skaters at the club as Head Coach Kevin Parrish begins to apply the finishing touches to his roster.

The State University of New York Athletic Conference (SUNYAC) is proud to announce the Commissioner’s List and All-Academic team for the Spring 2011 which recognizes student-athletes who competed during the winter or spring season.

Congrats on a job well done!!

Here's something that we may be seeing more of from recruits in the future...videos featuring game footage or highlight reels of the individual. This YouTube video looks at Brockport's newest addition, Marcus Farmer: 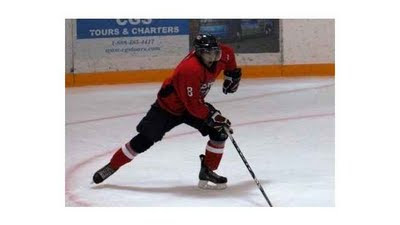 The Ontario Junior A Hockey League reports that Brampton Capitals defenseman Marcus Farmer has confirmed his commitment to join the Brockport State University Golden Eagles beginning with the 2011-12 SUNYAC season.

The 5'10", 172 lbs. native of Caledon, Ontario (born April 9, 1991), recently completed his second full season with the Capitals, recording 19 points in 41 regular season games played and a single assist during the club's preliminary round playoff loss.

Brian Duff, the host of On the Fly on the NHL Network wrote the following remembrance of Brockport hall-of-famer EJ McGuire for a recent installment of his blog at the Hockey News...

A few weeks ago I had the great pleasure of being invited to a season-ending banquet for the Williamsville North Spartans, as they celebrated their New York State Public High School Division 1 hockey championship.

This north Buffalo suburb has a history of producing the best teams in the state and North has found its way to the winner’s circle four times in the past 11 years, all under the guidance of Coach Bob Rosen.

And one thing we know about good coaches is that they don’t become great coaches without taking a little something from the leaders who’ve crossed their paths along the way.

Throughout the reception, the players came up to the front and made brief speeches, acknowledging their parents, coaches and teammates and then took varying amounts of hardware back to their tables.

Somewhat standard end-of-season items, except there was a specific reason behind the pen/penholder that was part of each trophy presentation and it certainly caught my attention.

E.J., a Buffalo native, had been a player, coach and assistant athletic director at Brockport College back in the 1970s and early ‘80s. During his incredibly influential days with that Institution (he was the first hockey player/coach inducted in the Brockport Athletic Hall of Fame) he was a teammate of Brian Cavanaugh. Cavanaugh had a long run as coach at Canisius College and at one point was assisted by Rosen.

E.J. believed that a pen/penholder provided something practical for day-to-day use, but at the same time, given it was a gift in honor of a championship season, would also serve as a reminder to never forget your teammates or the success you had together and how you achieved it.

Now this is not to suggest E.J. invented what is a common ornament on many office desktops. But it is interesting to note how an idea that came to him (the origin of which is unknown) was then passed on to those who played at Canisius through Cavanaugh and now at Williamsville North through Rosen.

It’s such a fitting tribute to E.J. It’s not flashy. But it’s full of character and value.

I was hoping to relay this story over the course of our weekend coverage of the NHL Entry Draft from Minnesota on the NHL Network. But as any of you who tuned in would know, a little bout of laryngitis kind of got in the way of some good storytelling.

Thankfully my colleagues Craig Button and E.J. Hradek were able to do more than their share in the absence of my voice.

The league paid a wonderful tribute to its fallen vice president of Central Scouting with a video montage of his career. It went one step further with a touching invitation to have E.J.’s wife Terry and daughters Jacqueline and Erin come up on stage to invite the Edmonton Oilers to make the first selection.

Knowing that this year’s draft was the first of forever without E.J. in attendance was incredibly sad for any of us who were fortunate enough to have known him or called him a friend.

At the same time, it was quite appropriate to look up at the draft board and see “EJ” in big letters beside the names of all the young men who have perhaps unknowingly benefited and will continue to benefit from his tireless work ethic and years of dedication to the game he loved so much.


Brian Duff is a host of On The Fly on the NHL Network. Like his minor hockey days (playing goalie, defense and forward) his broadcasting career has been all over the map. In radio and TV from Medicine Hat to Edmonton, Toronto to Ottawa and back, Brian has been with the NHL Network since 2007 and has been covering the game for nearly 15 years. Read more of his THN.com Blog: http://www.thehockeynews.com/listings/103-Brian-Duffs-Blog.html