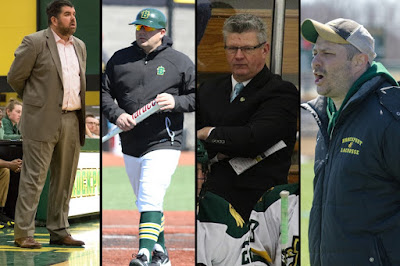 It was an exciting year for head coaches at The College at Brockport, with four different Golden Eagles becoming the all-time wins leaders in their respective sports. Steven Wagner from women's lacrosse, Greg Dunne from men's basketball, Brian Dickinson from ice hockey, and Justin Beach from baseball all eclipsed the wins record in their respective sports, and are still making strides to further that gap.

Wagner previously broke Traci Lian's record of 62 wins back in the second round of the NCAA tournament in the Spring of 2017. With the 17-7 win over Denison University, he notched his 63rd win as head coach for the Green and Gold. After a successful 2018 season, Wagner, continues to grow his record of 72 total wins.

"All of my success goes to the players," Wagner stated. "We had some very talented athletes come through the program who bought-in to the family and culture we created. Without that, I would not be as successful as I am."

Head coach Dunne from men's basketball was the next to break the wins mark for his program, after he surpassed Curtis Gaylord with 181 wins on January 9, 2018. After his 10th season at the helm with the Golden Eagles he posted a 190-114 record.

Dickinson from ice hockey was the third coach this past year to surpass the all-time wins record, as he did on February 2, 2018 in the 4-0 win over Morrisville State. With that win, he reached 180 wins which passed Bob Pederson previous mark of 179 wins. Coach Dickinson now tops the program with wins of 181, and looks to keep his winning ways going.

The last coach to join the all-wins list is head baseball coach, Beach, as he placed his stamp in the record book after the 4-1 win over Oswego State to give him his 254th win. He previously broke Mark Rowland's record of 253 wins after his 11-year stint, and now finished his 2018 season with 260 wins.

"It is such a great honor to become the all-time wins leader here at Brockport, my alma mater", Beach noted. "The credit goes to all the hard-working players, assistant coaches and administration over the past 12 years. We are very lucky to have a place that is so supportive from top to bottom. I am excited to see what the next 12 years bring."

All four of these coaches are an instrumental part to the success for these programs and they have created a foundation for future coaches and student-athletes to keep the winning tradition going.

More on Flannery's commitment to Brockport

From the Metro Jets staff comes the official news release on Robby Flannery's commitment to Brockport...

The national champion Metro Jets continue to ride the wave of their incredible 2017-18 season and today announced another NCAA commitment.

Veteran defenseman Robby Flannery, who skated three seasons with the Jets, going to the national title game each year, has committed to Brockport State University. Brockport is part of the SUNYAC conference and is located near Rochester, N.Y. Last season, the Golden Eagles finished 11-13-1 overall with a 5-10-1 conference mark.

“There was a lot about Brockport that was really appealing,” said Flannery, a 21-year-old native of Lathrup Village, Mich. “The hockey facilities are top notch and the campus was big, but not too big. It will definitely be nice to start college and get away from home. Next season, I would hope to fit in as someone that makes an impact right away. And someone that can be relied upon. Academically, I’m expecting a grind after being off full-time schooling for three years.”

In the classroom, Flannery is looking into studying a Business curriculum right now.

“‘Flanny’ is a special player in a lot of ways,” Jets coach-GM Justin Quenneville said. “He’s been a Jet for three years and done so much for this program. Even when he had NAHL interest, he chose to come back and finish what he started. He is a character kid who brings a lot on and off the ice. Everybody notices his shot and offensive ability, but one of his biggest skill sets is his stick. He does such a great job of breaking up and killing plays away from the puck. He generated a lot of NCAA interest this past season and really took his time on his decision. Brockport is getting a heck of a player and we wish Flanny the best of luck.”

A four-time Division 2 All-State player at Berkley High School (twice honorable mention), Flannery was named All-League Third Team this past season and tallied 14 goals and 47 points in 45 regular-season games. He also served as an alternate captain. In 2016-17, Flannery contributed 13 goals and 27 points and as a rookie, rattled off 18 points. Over his three years combined, Flannery posted a plus-148 plus/minus rating.

Flannery said his three seasons in Fraser helped his development, both on and off the ice.

“Metro has been an enormous part of my development not only as a player, but as an individual, too,” Flannery said. “And that is a huge reason why I got the opportunity to play NCAA hockey. I’d like to thank Q, (assistant coach) Randy (Wilson) and (assistant coach) Jamie (Lovell) for pushing me on and off the ice to get better. I’d also like to that Pete (Cammick) for being such a gracious owner of the team the past three years. And last, but not least, I’d also like to thank (director of communications) Matt (Mackinder) for making me look good and sound good in all the articles and videos the Jets post. And what would a thank you be without thanking my vet Jake Gleason, a guy who took me in and showed me the ropes.”

In making his commitment to Brockport, Flannery said he has to give credit to more than the hockey folks, too.

“Aside from the hockey people, I’d like to thank my mom and dad (Katy and Rob) for supporting me the past 18 years I’ve been wearing skates,” said Flannery. “I’d also like to thank my grandfather (Bob Flannery) and my Aunt Molly (Harder) for being huge supporters and watching every game they could for the past three years.”

Flannery said it’ll be a challenge next season to make the jump to college hockey, but will take a boatload of memories with him from his time with the Jets.

“What will I remember most? Easy. I’ll remember winning a national championship and getting to play hockey everyday with my brothers,” Flannery said.

Winn is Brockport's Rookie of the Year 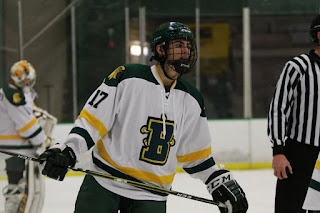 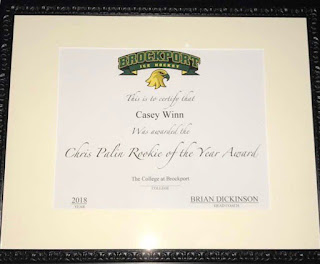 At the annual, year-end hockey banquet it was announced that Casey Winn won the Golden Eagles' "Chris Palin Rookie of the Year Award". The freshman defenseman had 1 goal and 7 assists while playing mistake-free defense that saw him have just 22 penalty minutes while leading the team in blocked shots.

"Thank you" and "good luck" to the seniors

This weekend is commencement weekend at Brockport -- a bittersweet event for sure. It's great to see the students graduate and go on to do great things, but at the same time, it's sad to see friends go their separate ways around the world and for us to say "good bye" to hockey players who entertained us on the ice for the past four years. Thank you to these young men for the memories...you played a lot of good hockey and you've made us proud on the ice, in the classroom and in the community. I wish you the very best of luck in the new adventures that are before you.

All of a sudden Oswego State hockey Coach Don Unger is a very popular man, and he doesn't like it one bit.

Everybody, it seems, wants to know how it feels to be coach of the team that allowed the fastest goal in hockey history.

It happened in a matchup of New York schools last Wednesday night when Brockport State's Chris Palin scored 3 seconds after the opening faceoff. At least, that's what the clock said in recording a goal 2 seconds faster than the official record in both the college and professional ranks.

There's only one problem--the official scoresheet signed by referee Jim Zarnick says the goal was scored with 19:55 left.

According to Unger, this is how the play developed: "The puck was dropped and we took the puck forward, that's 110 feet from the goal still."

After Palin gained control, "our forward went through and hit their man as he was skating down the boards, he skated over the blue line, then cut toward the net and took a screen shot through two of our defensemen and scored.

"The puck had to travel backward 15 or 20 feet, then diagonally about 20 feet, then it was passed another 20 feet to the red line. And then he had to skate it about 100 feet."

"They supposedly started the clock late and the people working the scoresheet decided to put down 5 seconds," Brockport sports information director Mike Andriatch said. "The people at the scorer's table should have changed the clock right then.

In case anyone missed it, Unger wants everyone to know the final score was Oswego State 8, Brockport State 5.

Horan is honored for academics at BESPYs

The College at Brockport Athletics Department held their end of the year award ceremony, the BESPYs on Sunday, honoring some of their top student-athletes. Brockport honored its two Scholar Athletes of the year, with Ice Hockey's David Horan repeating for the award. The senior is a double major, in finance and accounting with a cumulative GPA of 3.87. His peers on the ice also put up good numbers in the classroom as the hockey team was also recognized for having the best team GPA.

Zeis is with Team USA 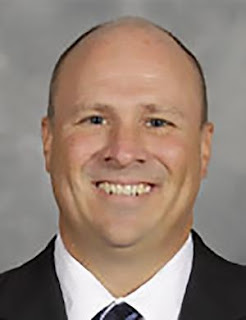 David Zeis is serving as an athletic trainer on a U.S Men’s National Team for the first time.

Certified by the National Athletic Trainers Association since 1995, Zeis is also a certified strength and conditioning specialist. Zeis earned a bachelor of science degree from SUNY Brockport in New York where he also played collegiate hockey. He also worked at University Sports Medicine at the University of Buffalo from 1993-95 as a clinical therapist and research coordinator.

Zeis and his wife, Michelle, live in Prosper, Texas, with their son, Brendon.