SAVES FOR A CURE'S FIRST PROJECT 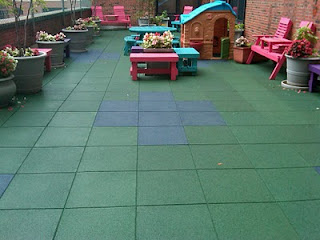 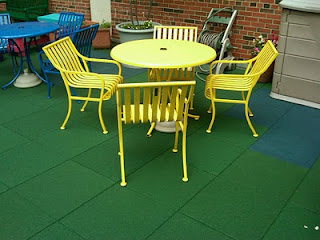 Saves For a Cure's first project is completed -- the replacement of the playdeck at Galisano Childrens Hospital at Strong. Now the kids can play in a safe and comfortable environment.

Prior to the project, the deck was full of tripping hazards, the upturned "tiles" just begging to knock over a sickened cancer patient.

You can see the "before" pictures here: http://brockporthockey.blogspot.com/2011/05/saves-for-cure-makes-huge-donation.html

This was made possible by a $15,000 donation from Saves For a Cure, a culmination of years of efforts by Todd Sheridan with the help of the hockey program, the Athletic Department and the community, all coming together for a common cause.

Saves for a Cure provides Spirit, Support, and Determination to children with cancer in hopes of lifting the spirits of some of the most courageous people you will ever meet. 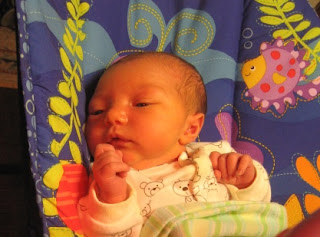 I'd like to introduce you to Brockport's newest hockey fan. Alexandria, the first child for Bernadette and I, was born last weekend, coming into the world the day before her mother's birthday. What a gift!

Bernadette might bring her by a game late this season for a brief cameo appearance to show her off. In the years ahead, though, I'll be bringing the delightful cherub to the games quite often.

I can just hear myself telling her 15 years from now: "Quit swooning over the hockey players and pay attention to the game!"

7 PM - Home Opener - Golden Eagles vs Fredonia State. Pre-Game tribute to former Golden Eagle player and coach E.J. McGuire. For those of you who do not know, E.J. is a former Brockport player and coach who went on to Coach in the OHL, AHL, and NHL before becoming the Director of Central Scouting for the NHL. E.J. passed away in April after battling cancer.

In addition, The Golden Eagles will be hosting a silent auction on both Friday and Saturday night, with the proceeds being donated to a fund set up for E.J. McGuire's children. Anyone interested in donating something to be included in the auction should contact Tim at tpanek@rochester.rr.com or Brian Dickinson at bdickins@brockport.edu

For those of you coming in from out of the area, there are two hotels in town. Their websites are:

TEAM TAKES PIES IN THE FACE 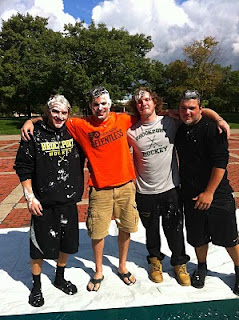 The photo at left shows some good sports.

As a part of Homecoming Weekend on the Brockport campus, the hockey team allowed pies to be thrown at them for charity.

NOBLE OFF TO GOOD START 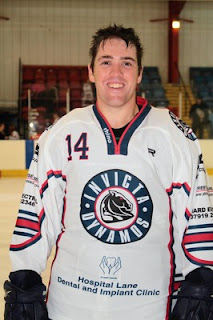 Justin Noble -- who was the Golden Eagle captain the past two seasons -- is off to a hot start for the Invicta Dynamos in the United Kingdom.

Over the past weekend, the first of the season, Justin had goals in each the 5-1 victory and 7-1 victory over the Bracknell Hornets. He also added an assist for good measure.

You can keep up with his overseas adventures at the Dynamos' website:

VOTE FOR SAVES FOR A CURE

The Brockport Athletics Department website has a poll that asks:

Which Charity/Cause would you like to see the funds raised from Homecoming Week events donated to?

One of the 4 choices is Saves For a Cure.

The Independent Free Press reports on the English adventures of one Mr. Justin Noble...

The Invicta Dynamos of the English National Ice Hockey League needed to sign the limit of two import players per team during the off-season and it turns out both of those roster spots will be filled by Georgetown residents.

Ryan Ellis, 27, and Justin Noble, 23, both played for the Georgetown Jr. A Raiders as 16-year-olds and graduated from Georgetown District High School, yet they’d never even heard of each other until last month when they signed with the Dynamos, who are based in Gillingham, about 45 minutes southeast of London.

Both left-wingers graduated from Division III colleges in New York after four solid seasons on the ice— Ellis from the Oswego State Athletics and Noble with the Buffalo-based Brockport Golden Eagles—and will embark together on their pro careers, which begins Saturday when the Dynamos travel to Bracknell for their season opener.

Neither player has ever been to England before, although Ellis’s father is British and his mother is from Scotland.

“The coach was telling me about what fixtures (games) we had coming up and I had no idea what he was talking about,” laughed the 5-foot-11, 190-pound Noble.

“It should be interesting to hear the first pre-game speech. Seriously, though, I did a fair bit of research and I know a few guys who’ve played in that league and they’ve said nothing but great things about this organization.”

Invicta finished fourth out of 11 teams last season in what’s considered Britain’s second-tier pro league. The 6-foot, 200-pound Ellis had planned to sign a contract in Britain two years ago but had difficulty getting a passport and hasn’t played for an elite-level team since then. He has been skating regularly and playing lots of ball hockey, while Noble graduated from Brockport with a degree in finance and economics after serving as captain for the varsity team for the past two seasons.

“It was really crazy how it all unfolded,” Ellis said.

“We’d never actually even met before we both signed. I was at my girlfriend’s in Vermont when I signed and the Invicta coach (Kevin Parrish) had no idea how big Georgetown was. He said something like, ‘Maybe you guys already know each other, or maybe Georgetown’s the size of London, England and you may never have met.’ Funny enough, we went to high school together and didn’t know it and now we’re roommates in another country.”

In another strange twist, ENIHL rules state that import players aren’t permitted on the ice at the same time in order to promote the development of home-grown talent. Both players will also be expected to take part in off-ice promotional appearances to help win over new fans in their soccer and cricket-crazed new home.

“It seems like it’s an ideal area to travel, which is a big reason why I wanted to play in Europe, to see more of the world,” added Noble, who acquired a Slovenian passport through his grandparents’ heritage to play there before receiving the offer to join the Dynamos.

“It’s an hour-and-a-half trip to Paris and five hours to Amsterdam and it’s great that I’ll have someone I know to travel with.”

Ellis, who has a business degree from Oswego State and a track record as a proven goal scorer wherever he’s lined up, didn’t want to have any lingering regrets later in life about not giving pro hockey a shot.

“I just looked at it that I’d be kicking myself when I turned 40 that I didn’t take advantage of an opportunity when I could have,” he said.

“You’ve got to do what you love, right?”