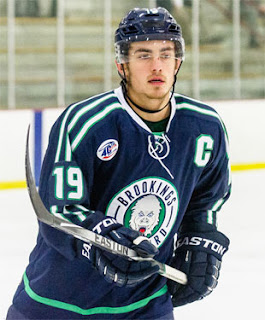 The Brookings Blizzard, proud members of the North American Hockey League (NAHL), are proud to announce that forward Connor Hutchins, the 2015-16 Captain, has made his NCAA Division III commitment to play hockey at The College of Brockport New York (SUNY-Brockport).

Hutchins, a North Richland Hills, Texas native, played in 55 of 60 games this season and finished with 14 points (8 goals, 6 assists) while being second on the team in power play goals. Hutchins, 21, played in 110 games over the past two seasons with the Blizzard finishing with 30 points (14 goals, 16 assists).

"Connor was a great leader that came ready to play every day. He will be missed by the team and by the town of Brookings,” stated Dan Daikawa, Brookings Blizzard Head Coach.
"I'm excited to be able to continue my hockey career at Brockport. The program there is on the rise and it's an exciting time to be a part of it. When it came down to it, Brockport was the best fit for me athletically and academically. I can't think the Blizzard organization and my teammates enough for all of their support. Being able to play in Brookings for two years and serve as Captain was an honor and an experience I'll never forget. I'd also like to thank my family who has been there since day one and supported me through this entire process,” said Hutchins.

Brockport's commencement ceremonies will take place this weekend. It's always a bittersweet time as the graduates welcome new adventures but close the book on a fun and formative time of their lives.

The following hockey players are graduating from Brockport this weekend. I say to them: "Thanks for all the awesome hockey memories and good luck in your post-Brockport lives. Continue to make the Golden Eagle community proud in everything you do!" 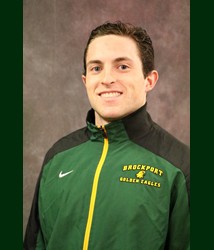 
Last week the Golden Eagles ice hockey team held their annual end-of-the-year break up dinner at which they handed out their season ending awards.