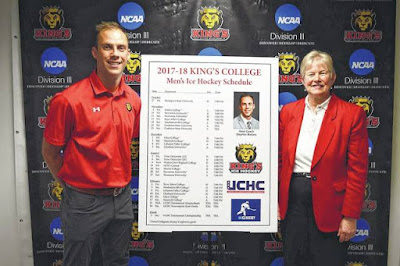 
It’s one of this summertime moments that makes fans hunger for hockey: The 2017-2018 schedule has been released.

The full schedule can be seen in column/toolbar at the right of this webpage.

There are 12 home games which sees the usual slate of SUNYAC foes coming to town, as well as Neumann, Williams, and Nazareth. Interestingly, 4 games are matinees – that is, not a 7:00 start – with 2 occurring on Tuesdays.

Mark your calendars for these home affairs:

Saturday, October 28, 7:00: Neumann comes to town which makes for good preparation for SUNYAC play. The Knights were 16-8-3 last year.

Friday, November 3, 7:00: SUNYAC play begins with a visit by Fredonia.

Friday, November 10, 7:00: The North Country teams pay a visit to the Rochester area with Plattsburgh starting off the weekend. Remember what the Golden Eagles did to them at Plattsburgh last season?

Friday, December 1, 7:00: Cortland is in town and it’s a must-see with Darren McCormick in his final year. He scored 21 goals last year: How can he top that huge season?

Friday, December 8, 7:00: Our biggest rival – Geneseo -- will be on campus. The games are always hard fought and many of their fans make the 40-minute drive to egg on ours. An awesome hockey experience.

Tuesday, January 9, 3:00: This battle with Williams might be the least-attended game of the year. Brockport will be on winter break. And, the game is at 3:00 on a work day. Let’s see what die-hards skip out of work early. The Ephs match-up well with Brockport, so it will be an exciting game.

Saturday, January 20, 7:00: Buffalo State played in the SUNYAC championship game a few months ago. They will be striving to do the same again in ’17-’18, adding to the Brockport-Buffalo State rivalry which has grown over the past few years.

Friday, February 2, 7:00 and Saturday, February 3, 4:00: The Morrisville Mustangs gallop into town for two games, including a 4:00 match-up on Saturday.

Saturday, February 10, 7:00: If they want to go out with a bang, our 8 seniors will have a tough foe to battle on Senior Night – Oswego.

The SUNYAC released its inaugural Commissioner's Academic Honor Roll, recognizing student-athletes with a 3.30 cumulative grade point average for the 2016-2017 academic year. Here are the high-performing students from the hockey team:

Our heart goes out to Oswego coach Gosek

Hockey is a tight-knit brotherhood, especially in SUNYAC. It's with a heavy heart that we report that Mary Gosek, the wife of Oswego head coach Edward Gosek passed away this morning. Our thoughts and prayers go out to Ed, Sarah, and Jeremy.