It's always good to see Brockport recruits playing at a high level. It gives players, coaches, and fans some real excitement and hope for the future of the Golden Eagles.

Consider Ryan Johnson, whom, as we blogged in November, made a commitment to Brockport.

The quicksilver Johnson saw a mid-season change of scenery to the OJHL Newmarket Hurricanes. It was a great decision by all parties because he has been instrumental in the Hurricane's run that now has them sporting a 2-0 lead in the OJHL Championship Series.

Last night, he netted the overtime game winner! That's clutch! We can't wait to see such performances at Tuttle North.

ROTHFUSS FOCUSES ON HEALTH AND HOCKEY

For this week's Brockport Stylus, Corey Desiderio wrote about Brendon Rothfuss's decision to forgo the 2013 lacrosse season to focus on his health and hockey....


We all come to points in our lives where we have to sacrifice something we love in order to greater benefit ourselves in the end. For Brockport junior Brendon Rothfuss, that came in 2012 when he gave up playing lacrosse in order to continue playing hockey at a high level for the Golden Eagles.

Rothfuss made the decision after missing the first six weeks of the 2012-13 hockey season with a dislocated shoulder.

He said the injury allowed him to reflect and gave him the idea to sit out for the 2013 lacrosse season.
“The trainers were all telling me that they didn’t know how my body would hold up this year,”

Rothfuss said. “I think it was the right decision to heal up and get my body back to where it needs to be as opposed to where I put it the past two years playing two sports.”

This isn’t the first time Rothfuss had to make this decision. A two-sport star coming out of Webster Thomas High School in Webster, Rothfuss had to choose between hockey and lacrosse in 2007.

“Originally I had a scholarship for lacrosse,” Rothfuss said. “I was pretty much set on going to Le Moyne [College] until March of my senior year of high school when I got a couple of contracts to play for junior [hockey] teams.”

Rothfuss, who started playing hockey when he was 2 years old, said he just couldn’t leave the game he put 16 years of his blood, sweat and tears into.

“I didn’t want to give up hockey,” Rothfuss said. “I knew if I were to choose lacrosse I would never get to play competitive hockey again. But if I did go play juniors, I’d maybe get a chance to play lacrosse again.”

After bouncing around three different teams in three years of junior hockey, that chance came in 2010.

“Ever since my first year of juniors, [coaches/recruiters] were coming to my games so I built a relationship with Coach [Brian] Dickinson,” Rothfuss said. “That guy was at everything. So from the standpoint of someone getting recruited, I saw the coach a lot.”

Dickinson said he was initially attracted to Rothfuss’ offensive ability, but once they started to talk more, he knew Rothfuss had all the characteristics he was looking for in a player.

“He’s dedicated, well spoken, solid academically and all his previous coaches raved about him as a person,” Dickinson said.

Rothfuss said he felt the same attraction toward Brockport as well.

“It had a good hockey program,” Rothfuss said. “They have a physical education program and then with the opportunity to get to play lacrosse again it was just like, OK, well absolutely I’ll do it.’”
As soon as Rothfuss chose Brockport, he said he thought he was going to play lacrosse for the school as well.

“The day I committed to Brockport for hockey, [Head] Coach [Ben] Wineberg texted me if I was interested in playing [lacrosse] and I absolutely was,” Rothfuss said. “It had been awhile since I’ve played in season, but I was really anxious to get the opportunity to play again.”

From the moment he set foot on campus, Rothfuss has shined on the ice, field and classroom.

In three seasons with the hockey team, Rothfuss has scored 17 goals and has 18 assists. In 2010-11 and 2011-12, Rothuss earned a spot on the All-Academic SUNYAC Team for hockey.

Rothfuss said stepping away from lacrosse was a tough decision for him, but it was made easier by the way his coach handled it.

“Last year was really tough on my body and Coach [Wineberg] knew that,” Rothfuss said. “There were days that I could barely get out of bed. He was more than supportive. He thanked me.”

Dickinson said he was pleased to hear Rothfuss decided to step away from lacrosse to focus more on hockey.

“Brendon has had numerous injuries throughout his tenure here at Brockport,” Dickinson said. “I believe he would like to let his body heal and put his best foot forward toward winning a SUNYAC Championship during his senior season.”

While Dickinson said he is looking forward to having a memorable season with a healthy Rothfuss in 2013-14, Rothfuss said he has not ruled out returning to the lacrosse field for one final go his senior season.

“We’ll see,” Rothfuss said. “Depending on how I feel and the timing and stuff with student teaching, I may play again.”

For this week's edition of the Brockport Stylus, managing editor Brandon Wood penned this article about Matt DeLuca's rise to the captaincy of the Golden Eagles...

Matt DeLuca remembers playing hockey in the driveway of his home in Skippack, just outside of Philadelphia, wearing his Flyers Eric Lindros jersey with a ‘C’ emblazoned on it. He remembers all the hard work he had to put in from that moment on to be where he is now: a junior defenseman on the Brockport Golden Eagles ice hockey team. All of that hard work is going to pay off with his own ‘C’ sewn into his jersey next season.

DeLuca tweeted from his personal account April 1 about becoming the next captain for the Golden Eagles, writing “I couldn’t be more proud to be named the next Captain of #BrockportHockey. It’s all about the team and I have the best teammates in the world.”

Many current and former players have since reached out to him through social media to congratulate him and wish him luck in the position.

Early in his career, DeLuca played three seasons for the Philadelphia Junior Flyers before moving to Syracuse to play with the Syracuse Stars, another junior team. DeLuca said while playing for the Stars, he was being recruited by Brockport, Buffalo State, Fredonia and Utica College along with several colleges outside of New York.

But after he came to Brockport for its 2009 home opener against Morrisville State, a game the Golden Eagles won in overtime, he didn’t need to continue his search for where he would play hockey in college. He was going to become a Golden Eagle.

“I made the trip to watch the game and I fell in love with the whole atmosphere,” DeLuca said. “As soon as I left Tuttle North after the game I came out to see I said, ‘I’m coming here, there’s no way I’m not coming here.’”

DeLuca said his freshman year was tough for him, as Brockport was winless through its first 11 games and won only four games total that year. While some players pondered quitting the team, DeLuca never wavered in his drive to stay at Brockport and help rebuild the program.

“Somewhere along the line I felt like I was supposed to be here for one reason or another,” he said. “I feel like the stars are finally starting to line up. Freshman year was a tough year, a lot of guys were thinking about leaving and I made the decision to stay here and that I was going to turn this program around. I feel like I have finally been given the opportunity.”

His opportunity now includes mentoring a young team that had 14 freshmen this past season and has seven players committed to begin playing at Brockport in the fall, according to collegecommitments.com. DeLuca said he wants to make all of the new members feel like they’re part of Brockport hockey, just like his predecessor Mike Hayward did. Hayward, a former defenseman, is graduating this year.

"When it boils down to it Matt is a vocal guy,” Head Coach Brian Dickinson said of his decision to make DeLuca captain. “Moving forward, we need somebody who is going to take charge of the locker room and really take charge of the details in the offseason and keep everybody working and we think Matt can do that.”

Throughout his three-season career at Brockport, DeLuca has four goals and 12 assists. Despite having played in 72 games, he has never played in a SUNYAC playoff game. The last time the Golden Eagles made the playoffs was back in 2010, the season DeLuca came to watch the Morrisville game.

When practice starts in the fall, not a single player in the locker room will have played in the SUNYAC playoffs. That’s the main thing DeLuca said is his goal.

“Flat out, make the playoffs,” he said.

“After three seasons that I’ve been here, not making the playoffs makes for a long offseason and it’s something that you think about for seven or eight months,” he said.

DeLuca said he is honored to be the captain of the team for his final season of NCAA eligibility, but his legacy could be defined on whether he can lead this team back to the SUNYAC playoffs, which would be his biggest honor of all.

DeLUCA IS BROCKPORT'S NEXT CAPTAIN 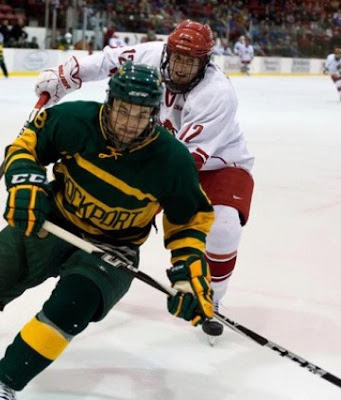 Carrying on Brockport's rich tradition of great captains, Matt DeLuca has been designated as the team's leader by example and by title for the 2013-2014 season. Matt is a high-character leader both on the ice and off off it. The junior blueliner has 72 NCAA games under his belt and sports a 4-12-16 stat line. An extremely well-disciplined player, he has only 36 penalty minutes in 3 seasons.