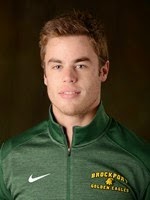 At last night's Division III championship banquet in Minneapolis the D3 All-Americans were announced and Brockport's Chase Nieuwendyk was designated as Third Team All-American in the east. He is just the second Brockport hockey player to ever receive All-American honors.

Nieuwendyk had 18 goals and 12 assists this season, which included an amazing 11-8-19 line in 16 conference games. He had 9 power play goals on the year, second most in the nation.

Anthony Buonasera of the Stylus wrote this nice article that looks at what assistant coach Stephen Mallaro has meant to the program...

The State University of New York Athletic Conference is proud to announce the Player of the Year, Rookie of the Year, Coach of the Year and All-Conference Teams for the 2014-15 men's ice hockey season. All the awards were voted on by the head coaches in the conference.

Oswego's Shawn Hulshof was named this year's SUNYAC Player of the Year. The sophomore forward led his team with 40 points (19 goals and 21 assists), helping the Lakers to an 18-3-4 overall and 12-2-2 regular season conference record and a second place finish in the SUNYAC tournament. Oswego received an at-large bid into the NCAA Division III tournament where they will play Hobart College on Saturday.

Cortland's Dan Broderick took the SUNYAC Rookie of the Year honors. The White Plains native tallied 40 points on the year in 25 games, with 17 goals and 23 assists. Broderick notched 26 points in conference play, placing him fourth in the conference, with 14 goals and 12 assists in his freshman campaign.

The Coach of the Year went to Plattsburgh's Bob Emery. In his 26th season at the helm of the Plattsburgh program, he led the Cardinals to a 13-2-1 conference record and the SUNYAC tournament championship crown, its first since 2012. The SUNYAC title was the program's 22nd in its history. This is the seventh time Emery has been honored as the SUNYAC Coach of the Year. The Caridnals will head into the NCAA Division III tournament with an automatic bid.

The 2014-15 SUNYAC Ice Hockey All-Conference Teams are listed below.

Dylan Shapiro was selected as the SUNYAC hockey rookie of the week.

Dylan Shapiro exploded for two goals in a victory over the higher seeded Geneseo Knights, as Brockport upset the # 3 seed Knights 6-4 Wednesday.

Aaron Green was selected as the SUNYAC goalie of the week.

Here's what SUNYAC noted of his performances...

Aaron Green had a tremendous performance in Brockport's upset victory over #3 seed Geneseo. He topped his career high with 59 saves in the 6-4 victory over the Knights. The Golden Eagles lost to #1 seed Plattsburgh in the semifinal but Aaron Green did all he could to keep the team in the game, finishing with 34 saves on 40 shots faced. Brockport lost 7-5 as the Cardinals scored an empty net goal late in the game.

THANKS FOR THE MEMORIES

Brockport gave the Plattsburgh machine a serious run for its money in last night's playoff game, hanging in there at 6-5 till the last couple of minutes when the Cardinals put the game out of reach with an empty netter.

That dramatic game and getting so close to the SUNYAC championship game was the icing on the cake for what was one of the most entertaining and memorable Brockport seasons in memory. I would put it a close second to the 2008-2009 team which I rank as my all-time favorite in my 22 seasons watching the team....that's how special this year was.

The team and personal accomplishments were many.

Early in the season, Brockport almost took Plattsburgh on home ice with a nail-biting 1-0 affair.

Saves For a Cure weekend was a smashing success with 2 jersey auctions.

They tied the always powerful Oswego in Oswego's barn.

Brockport won the Rutland Herlad Invitational during the Thanksgiving break.

The Golden Eagles shut out Buffalo State and Fredonia in consecutive games.

They had a team record six-game winning streak.

They avenged a 0-2 regular season record against our greatest rival Geneseo by beating them in the playoffs 6-4.

Chase Nieuwwendyk scored 18 goals on the season, including 11 in SUNYAC play. He was magical every time he touched the puck and many of his plays were jaw-dropping.

Speaking of defensemen, Bobby Chayka had an unprecedented performance for one, scoring a hat trick in  a playoff game...against Plattsburgh no less.

In the regular season, James Ryan also scored a hat trick against Plattsburgh.

Aaron Green had one of the best seasons ever for a Brockport goalie, with single seasons totals that saw the second best goals-against-average, second best save percentage, the third-most wins by a goalie, two shutouts, 59 saves against Geneseo in the playoffs and an out of this world .927 save percentage and 2.24 GAA in conference play.

These are just a few of the things that made this season so memorable.

The season makes me damn proud to be a fan of the Golden Eagles.

Thanks for the ride!

Thanks for the memories!

BROCKPORT GETS SO CLOSE TO CHAMPIONSHIP GAME

Senior defenseman Bobby Chayka (Hardwick, NJ) scored a hat trick and started a comeback effort in the second period for The College at Brockport Hockey team but a pair of power play goals and an empty net goal by Plattsburgh in the third period gave the Cardinals a 7-5 win Saturday night in the semifinal round of the State University of New York Athletic Conference (SUNYAC) Tournament in Plattsburgh.

Plattsburgh (19-5-2) opened the game scoring two quick goals in the first five minutes of the contest but Brockport (13-12-2) battled back with Chayka scoring the first of three goals just 30 seconds after Plattsburgh had taken the 2-0 advantage to trim the lead in half.

The Cardinals added two more goals including one power play tally before the end of the period to take a 4-1 lead into the first intermission.

In the second period, Brockport came out with increased energy and controlled much of the play for the first several minutes. Plattsburgh called its only time out of the game early in the period in an attempt to regain some of the momentum but Chayka capped a three-man rush up the ice with a hard shot from the top of the slot to make the score 4-2.

Five minutes later, with Plattsburgh on a power play, Chase Nieuwendyk (Georgetown, ONT) tapped the puck away from one of the Plattsburgh defensemen at the blue line and carried the puck into the Cardinal zone. A cross-ice pass to Chayka and a quick hard shot to the top corner of the goal made it a one-goal game and gave Chayka a hat trick.

Two minutes later, goalie Aaron Green (Mt. Albert, ONT) made a sliding save across the crease sending the puck into the corner. A pass out of the zone found the stick of Jake Taylor (Port Perry, ONT) led to a quick rush up the ice and into the Plattsburgh zone. Taylor dropped a pass to senior Troy Polino (Limerick, PA) who fired a low shot from just inside the blue line that found the back of the goal and tied the score at 4-4.

In the third period, Plattsburgh rallied for a pair of power play goals, one at 1:30 of the period and the second five minutes later to take a 6-4 lead.

Down two goals with less than six minutes to play, Brockport scored again to trim the lead to one at 6-5 as Chris Luker (New Hartford, NY) walked in from the blue line on a power play and snapped a hard low shot into the corner of the goal.

Two minutes later freshman Dylan Shapiro (Rochester, NY) had a good chance to tie the score as he carried the puck from behind the end line and looked to stuff the puck into the corner of the goal but it was saved.

With 1:53 left to play and a face off in the Plattsburgh zone, Brockport called its time out and pulled Green out of the goal for the extra attacker. Taylor won the ensuing faceoff but the puck was intercepted before reaching the defense at the blue line and Plattsburgh skated into the Brockport zone to score the empty net goal and regain the two-goal advantage.

Brockport had a couple shots in the closing minute but could not cut into the lead.

Chayka led the offense with three goals and Nieuwendyk added a goal and an assist. Green made 34 saves for Brockport.

Plattsburgh advances to play Oswego for the SUNYAC title Saturday, March 6 in Plattsburgh. Oswego posted a 2-0 win over Buffalo State in the other semifinal game.