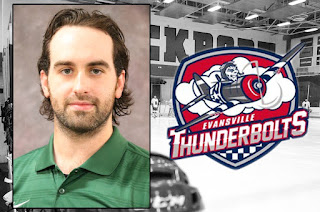 Rob Hall, who served as an assistant captain on The College at Brockport ice hockey team during the 2016-17 season, is continuing his playing career at the professional level. He'll be playing with the Evansville Thunderbolts of the Southern Professional Hockey League (SPHL) during the 2017-18 campaign.

Directly following the conclusion of Brockport's season, Hall knew that he wasn't ready to hang up his skates, so he made a push to land himself a roster spot on a professional team.

"As soon as our season ended I reached out to an advisor from back home and asked him if he knew of any teams looking for a defenseman," recalled Hall. "He got me in touch with the coach, and I was able to get right down there and actually played the last 11 games of their season."

One of his teammates for those 11 games was fellow Brockport graduate Chase Nieuwendyk, who played the entire season in the SPHL after graduating in 2016. Nieuwendyk adjusted quickly to the league, recording 15 points (seven goals, eight assists) across 40 games in his rookie season.

Hall also acclimated quickly to the league, dishing out three assists in his short stint with Evansville in 2016. He did, however, acknowledge that there was a definite change in level of play.

"The guys are a little bit bigger, faster, stronger, but really the speed of the game wasn't too different to what I was used to at Brockport," said Hall. "The biggest adjustment was the smarts; all the guys have really high hockey IQ and just know where to go without the puck."

One of the things that helped him prepare for that transition was his off-season training. Hall, who grew up in Schaumburg, Ill., has been training with professional hockey players for a number of years now.

"One of my best friends from back home plays in the ECHL [East Coast Hockey League], and has played in the AHL [American Hockey League] in the past," remarked Hall. "Whenever I go home I train with him and some other guys from that level, so it was definitely helpful having played with guys that speed and size before."

That extensive training certainly paid off for Hall, as his performance in the final few games of the Thunderbolts season earned him an invite back for 2017-18. Although a huge achievement in itself, Hall has even loftier goals for himself going forward.

"The next level up from the SPHL is the ECHL, but my ultimate goal is to keep climbing and just see how far I can go," said Hall.

He'll start chasing that goal on October 21, when the Thunderbolts open regular season play with a home matchup against the Peoria Rivermen.

No golf outing this year

There will not be a golf tournament to benefit Brockport hockey this year. They hope to bring it back in 2018.

Attendance was at the middle of the pack

USCHO.com has released the final 2016-2017 attendance rankings for DIII hockey.

The 335 attendees per game ranks 35th in the nation.

Come on, Brockport, we can do better -- and we have. 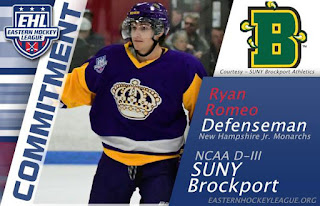 Joseph Romeo, a defenseman for the New Hampshire Jr. Monarchs, has committed to SUNY Brockport for the Fall of 2017.

The 21-year-old, who goes by the name of Ryan, tallied 24 points in 53 total games this past season for the Monarchs.

The EHL veteran spent the past couple seasons in New Hampshire, and now sets off to join three of his teammates from the 2015-16 team. When Romeo arrives at Brockport this Fall he will be joined by Luke Bennett, Chris Pollini, and Hunter Laslo, a trio of former Monarchs that just completed their freshmen season with the Golden Eagles.

This past season SUNY Brockport had 7 EHL alumni on their roster. The number will rise again this Fall with the arrival of Romeo, Shane Visnick (Hartford Jr. Wolfpack), and Tyler Williams (Philadelphia Jr. Flyers).