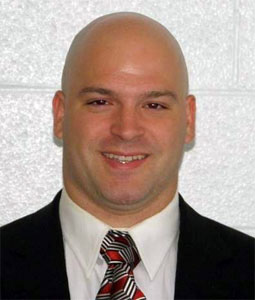 Michael Gershon was an impressive, hard-hitting defenseman for the Golden Eagles who graduated in 2009. He was a top-notch blueliner who scored a hat trick in 7-2 demolition of Geneseo in 2008 and was awarded Second Team All-SUNYAC honors that same season.

Gershon comes to the Colonials from the North American Hockey League's Keystone Ice Miners, where he served as head coach, president and general manager during the 2014-15 season.

"We are very pleased that Michael has joined our staff," said head coach Derek Schooley. "To be able to add a coach with three years of junior hockey head coaching experience will not only add to our players' development but add to our staff's development."

"Mike has a good hockey mind and we are excited to have him work with the Colonial Hockey program," said Schooley.

As a three-year NAHL head coach, Gershon led the development and advancement of his players, moving 21 players into the college hockey ranks. In those three seasons, Gershon coached his team to three consecutive NAHL postseason appearances including an NAHL North Division Title at Port Huron. Gershon compiled an 88-57-19 record in those three seasons, serving as a both a head coach and assistant coach for NAHL Top Prospects games.

A former NCAA Division III defenseman, Gershon graduated from SUNY-Brockport with a degree in Communcations in 2009. Gershon was named second-team All-SUNYAC in the 2008-09 season and served as an assistant captain during his senior campaign.

Gershon played professionally in the ECHL on the Wheeling Nailers defense in 2010-2011 and for the IHL's Port Huron Icehawks in 2009-10.