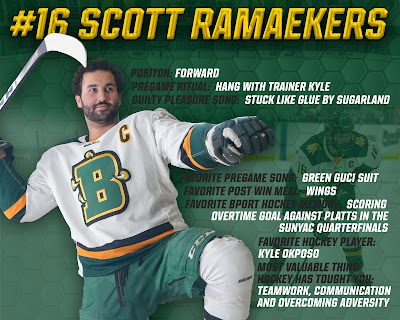 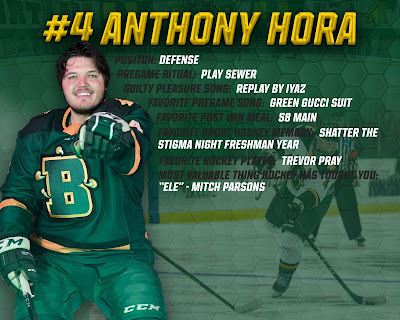 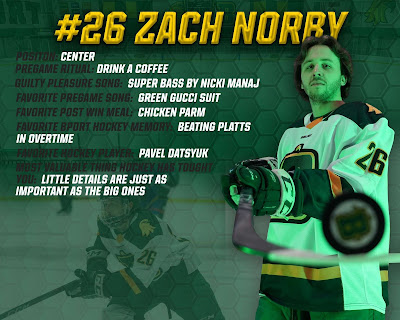 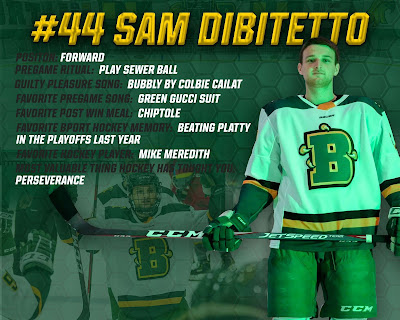 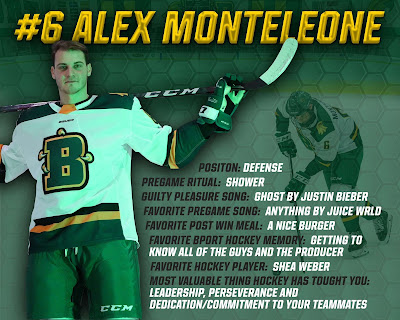 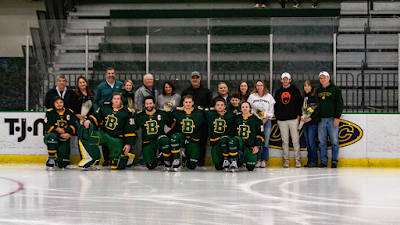 The SUNY Brockport Men's Ice Hockey team fell to Neumann University 2-1 in a face paced match up Saturday, October 29th at the Wegmans Ice Arena celebrating Senior Day. Brockport now moves to 1-1 overall for the season. Nuemann University's win tonight also puts them at a 1-1 overall record this season after falling to Geneseo the night prior,

To start the Match the team recognized and thanked each Senior for their contributions to the program. Zach Norby, Aidan Curry, Sam Dibitetto, Scott Ramaekers, Anthony Hora, and Alex Monteleone were honored.

While there were no goals till the third period, the penalty box gave the audience more than enough to keep everyone entained. Chris Aarons started off the train with boarding penalty at 7:40 into the first. This lead to the first power play kill for the Green and Gold Soon after Wyatt Wong from Neumann University was put away for hooking giving Brockport a power play opportunity.

The second period started and ended with another 20 minutes of 0-0, yet a lot of movement on the ice. Matt Anastasia received a penalty that was not scored on, allowing the team to receive another power play kill. Tyler Kulas was thrown in the box for cross checking at 6:06 in the second along with Zach Norby for roughing, causing two minutes of four-on-four play.

The Golden Eagles had a total of 11 shots in the second period. Michael Meredith, Connor Galloway, Andrew Harley, Alex Monteleone, Anthony Hora, Sam Dibitetto, Jake Mendeszoon and Matt Anastasio all recorded shots for the Green and Gold in the second. Both teams wrapped up the second period 0-0.

The Third period began with another double penalty as Jacob Rodrigue and Brady Mistler were penalized for roughing. Another two minutes of four-on-four play without a goal.

Four minutes into the third Connor Galloway received a penalty for a cross-check. Neumann scored on the power play making the score 1-0 at 5:48.

Anthony Hora was quick to snap back. At 10:29 into the third Hora scored assisted by teammates Sam Dibitetto and Manny Sanchez.

Jacob Rodrigue received a penalty at 17:58 for roughing and Neumann scored on the power play making the final goal for the 2-1 game. Brockport pulled Goalie Aidan Curry in hopes to come back with the extra manpower.

Curry played between the pipes for all three periods and made a total of thirty saves, allowing two goals. 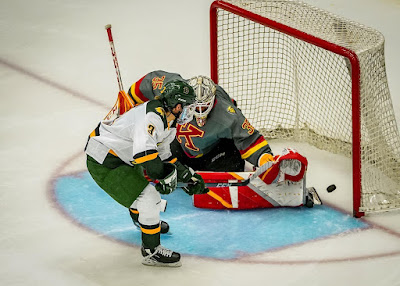 The SUNY Brockport ice hockey team earned its first win of the season on Friday at home in the Wegmans Ice Arena. The men defeated the Kings College Monarchs in a fast paced, 6-1, game.

Team captain, Anthony Hora was back in business in a big way to start his senior campaign. He scored the first goal of the season at 6:28 into the first period. Chris Aarons found Matt Anastasio who sent the puck across the ice to Hora for the score.

Eight minutes later Ryan Brow cleared the puck from behind his own net towards teammate Sam Dibitetto. Dibitetto sent the puck up ice to freshman forward Josh Grund to score his first collegiate goal. The Golden Eagles ended the first period with a 2-0 lead.

Brockport extended the lead early on in the second thanks to Connor Galloway. Galloway added another goal to the book 4:57 seconds in to the second period assisted by teammates Andrew Harley and Chase Maxwell.

The Kings Monarchs returned the favor at 9:14 into the second period to make it a 3-1 score. Jack Cooper scored the only goal for the Monarchs, assisted by teammate Erik Borschevsky.

Matt Anastasio was quick to make up the point allowed and scored a minute later at the 10:42 mark in the second. Teammates Chris Aarons and Alex Monteleone were credited with assists. The Green and Gold went into the third period up 4-1 over the visiting Monarchs.

The final period of play got off to a hectic start as two goals were scored for the Golden Eagles within a minute. Hora scored at 3:07 into the third, assisted by teammates Griffin Tominez and Chris Aarons. Andrew Harley got in on the fun with a goal 43 seconds later, assisted by teammates Connor Galloway and Jake Mendeszoon.

To start off the season Nolan Egbert spent 60 minutes between the pipes for the Green and Gold. Nolan made a total of 40 saves throughout the night only allowing one goal, which was scored in the second period.

The Golden Eagles return to the Wegmans Ice Arena on Saturday, October 29th for Senior Night. They play host to the Neumann University Knights for more non-conference action. Puck drop is at 4pm and can be watched live using the following link; Senior Night Link. 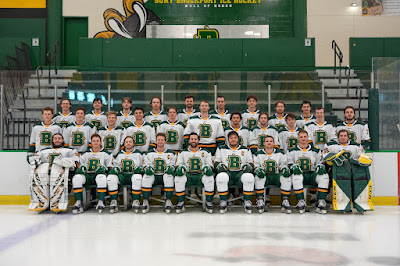 The SUNY Brockport men's ice hockey team is set to start regular season play this weekend at the Wegmans Ice Arena in Brockport, NY. The men will host the Kings College Monarchs on Friday, October 28th at 7pm and the Neumann University Knights on Saturday at 4pm to celebrate Senior Day.

Last Season: The Golden Eagles finished their 2021-2022 regular season with an overall record of 14-11-2 and went 6-8-2 in the SUNYAC conference. They earned the sixth seed going into the conference tournament. That February they played the SUNY Plattsburgh Cardinals up north at Plattsburgh for the first round matchup. Connor Galloway scored with just one 1:17 left in the third period for his second hat trick of the season, tying the score 6-6 and pushing the game into overtime. After eight minutes of battle, Anthony Hora sent the puck down ice to Andrew Harley. Harley's shot was blocked, but brought the puck around the net and found teammate Scott Ramaekers who snuck it in the bottom left corner for the game winner. Ramaekers' overtime goal clinched Brockport's first postseason win against the Cardinals since 1976. The men then went on to face SUNY Geneseo in the semifinals, ending their 2021-2022 SUNYAC journey with a,  3-1, loss to the Knights.

Schedule Summary: Breaking down the team's schedule, the Green and Gold will play in 27 regular season games made up of 16 conference and 11 non-conference matchups. The Golden Eagles started their season by hosting two home exhibitions against the Niagara University Club team and the EHL All-Stars. The men have their home opener Friday October 28th, followed closely by Senior Day on Saturday October 29th. The team then heads on the road for three SUNYAC matchups before returning home to host the conference home opener against the Cortland Red Dragons. The men finish out November with two games on the road and start December in Fredonia before returning for two home SUNYAC matchups. Buffalo State will visit the Wegmans Ice Arena to play on Saturday, December 3rd. The last game of the semester will be played at home against SUNY Geneseo on December 9th.

Brockport will start the second half of the 2022-2023 season in Dudley, MA at the Nichols Tournament. The men will play four games over the course of January 7th and 8th before returning home to play a non-conference game against Fredonia. The Golden Eagles then spend another weekend in New England at Franklin Pierce University in Rindge, NH on January 14th. They return home for a game to play Morrisville State, travel to Canton, before then hosting Canton in a busy week. Brockport plays seven SUNYAC opponents to finish out regular season, including a road game at Geneseo for the finale.

Key Returners: Our leading scorer returns after his rookie season last year. Forward, Andrew Harley will return to the ice for the Green and Gold after putting up 15 goals, 17 assists, and 32 points. Harley was Third-Team All-Conference, after finishing third in the conference for points and fourth overall for goals. Connor Galloway will also be back for the Green and Gold, this year as a team captain. Last season he was a vital part of the Golden Eagles offense with 11 goals, 20 assists, and 31 points. He was ranked third in the SUNYAC in assists and tied for fourth in total points. Anthony Hora and Scott Ramaekers will also be returning, this time as team captains for the 2022-2023 season. Hora was ranked second in the SUNYAC in goals amongst defensemen. Hora put up five goals last season as well as 13 assists and 18 points. Nolan Egbert will be between the pipes once again for the Golden Eagles. Last year Egbert played 1203:54 minutes, made 569 saves, and had a save percentage of .912. 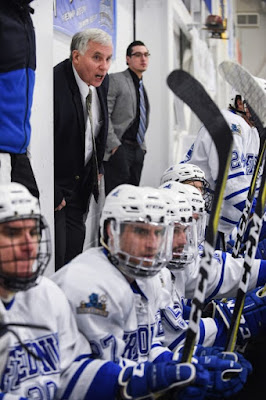 Here's a great article about Fredonia Hockey's Jeff Meredith, who is entering his 35th season as Fredonia's head coach. Jeff is a great guy, someone who is at once a Brockport foe and beloved alumnus (even two sons played for Brockport!). Jeff is a positive force for his student-athletes and the entire hockey world