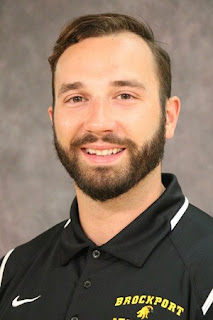 A new face you'll see around the arena this year is Dominic Trento who has joined the Brockport Athletics staff as a first year assistant coach for the men's ice hockey team.

Prior to coming to Brockport, Trento served as the assistant captain for the University of Massachusetts Minutemen of Hockey East. The Brockport, N.Y. native played for multiple leagues prior to playing at the collegiate level including the Dineen Cup Champion, New Jersey Hitmen of the EJHL, where he was the leagues offensive MVP.


Trento's responsibilities will be serving as the teams second assistant coach in addition to holding the position of hockey operations coordinator, where he will have a focus on video breakdown and analysis.

While at Brockport, Trento will also be pursuing his graduate degree in Athletic Administration while also serving as a faculty liaison for the Student Athlete Advisory Committee.