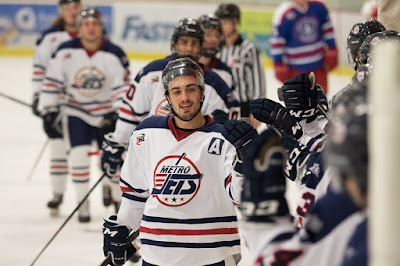 Last week, Robby Flannery took to Twitter to announce his commitment to Brockport. The 6'2", 190-pound Michigan native has been playing junior hockey with the Metro Jets of the NA3HL the past 3 seasons, most recently wearing the "A" on his sweater.

Averaging more than a point a game as he did this year is always a huge accomplishment but consider how remarkable his output is -- he's not a forward, he's a defenseman!

His defensive savvy and playmaking abilities have been a critical part of the Metro Jets success. In his 3 seasons there, the Jets won 3 Fraser Cups, the championship of the NA3HL. 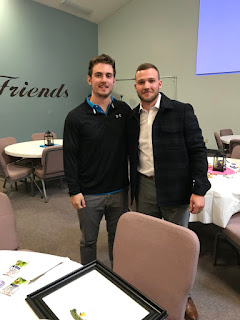 At last night's annual celebration, the Golden Eagles announced their captaincy for the 2018-2019 season. Two men will be wearing the "C": Connor Hutchins and Hunter Laslo, who will both be juniors next year. 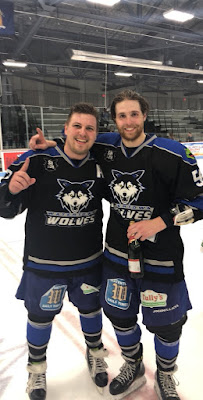 Troy Polino (2011/2012 - 2014/2015) and Jesse Facchini (2012/2013 - 2015/2016) are Brockport alumni who are still living the dream. On Wednesday night they and their fellow Watertown Wolves secured the Federal Hockey League's Commissioner's Cup. They were big contributors. For example, in Game 3 of the best-of-five series, Facchini scored 2 goals and Polino had 1. In an interview with the local paper afterward, Facchini attributed that success to the chemistry they built in their Brockport days. Congrats to these Golden Eagles! 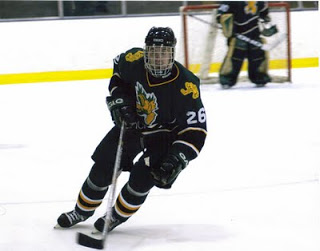 Every Thursday we'll post a photo or memory here to reflect on players, games, and fans of the past.
On the night of Tuesday, October 17, 2000, the College at Brockport played one of its most exciting games in team history, an exhibition game against Humber College out of Toronto, Ontario.
The sparse crowd of only 250 fans saw a game of epic proportions. It was high-scoring affair eventually won by Brockport 9-7 thanks to a 6-goal flurry in the second.
Amidst all that goal scoring was physical hockey like you’ve never seen. There were 29 penalties in the match-up, including three 10-minute misconducts and a game disqualification. In total the teams accounted for 96 minutes of penalties.
That aggression didn't stop at the final buzzer: During the post-game handshake a Brockport player had his helmet off and was innocently shaking hands when all of a sudden a Humber player blasted the unprotected and unsuspecting soul right in the nose, instantly bloodying his face.
You don’t see games like that too often….and you definitely don’t see a single player’s performance as we did that night very often.
Brockport’s Nick Smyth had the greatest game ever by a Brockport hockey player.
In his first game for the Golden Eagles he scored a school-record 5 goals. An impressive total no doubt. What makes it even more extraordinary is that he scored a natural shorthanded hat trick!! How's that for a debut!!
That was the first time that ever happened in the NCAA...or was it?
NCAA purists will say that Neil Musselwhite’s (against Brockport, no less, in 2009) was the first in NCAA DIII history being that it was a true NCAA game pitting two NCAA colleges against one another while the Brockport/Humber game was a US/Canada event featuring only one NCAA school.
But, that’s semantics. Smyth’s was the first by a player at the DIII level of US collegiate hockey and he should be recognized for it. 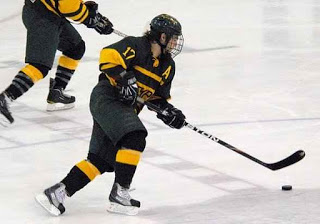 On the Humboldt Broncos tragedy

As the hockey world reels from the tragedy that befell the Humboldt Broncos junior hockey team, one can't help but wonder if we know someone connected to the Broncos. In SUNYAC, there is only one player who recently played for Humboldt -- Brett Horn of Potsdam. The freshman played for the Broncos last season, so he knows and played alongside some of the young men who passed. Our hearts go out to Brett, the Broncos, the real families, the billet families, and the entire Humboldt community in these dark days of grief and sorrow.