Tremblay to release the Kraken 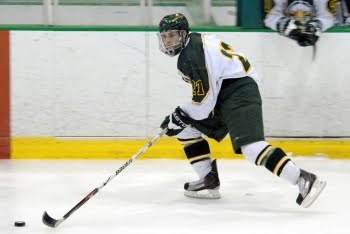 Longtime Brockport fans will remember Ray Tremblay who played for the Golden Eagles from the 2008-2009 through the 2010-2011 season. He was a big contributor to the playoff seasons of that era and had 7 goals in the magical 2008-2009 season that was a turning point in the program's history.
His successes on the ice would not have been possible were it not for his incredible guts and work ethic. Most men would have given up on hockey following an injury he sustained before college that cracked two bones in his back and had him in bed for 23 hours a day for 3 months following his surgery.
That incredible character translates well into coaching, as he has showed before.
He's getting that chance again as head coach of the newest team in the VIJHL -- the Kraken.
We wish Ray the very best!
https://www.timescolonist.com/sports/move-over-seattle-lake-cowichan-gets-kraken-too-1.24323516 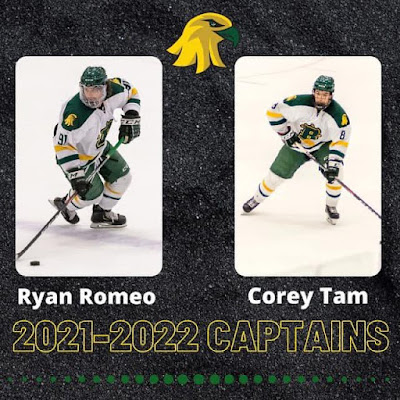 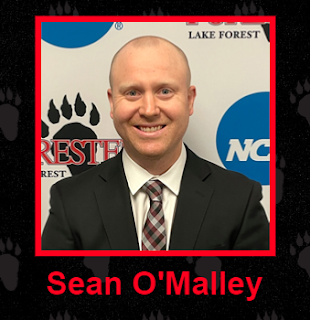 After 7 years as head coach of Lake Forest College men's hockey, Patrick Kelliher is resigning to relocate with his family. He will be replaced by Sean O'Malley, the team's top assistant for the last seven years.

Lake Forest is 87-64-16 overall and 66-47-9 in conference play since Kelliher took over as head coach and O'Malley became his assistant in 2014. The Foresters reached the semifinals of the 2018 and 2019 Northern Collegiate Hockey Association Harris Cup Playoffs and qualified for the NCAA Division III Tournament for the first time in 29 years in 2019-20. The team has been nationally ranked on several occasions and listed as high as #6 in the nation during his tenure.
"I look forward to watching Coach O'Malley lead this program to new heights in future years," Kelliher said. "There could not be a better or more deserving person to take over the helm. Sean's tireless efforts over the past seven years have been a huge part of where this program is today."
O'Malley, who has also been the Foresters' head women's golf coach since 2017, came to Lake Forest from the State University of New York at Potsdam, where he served for two seasons as an assistant coach, recruiting coordinator, and academic advisor. He has also been an on-ice instructor at Can/Am Hockey Schools in New York and Ontario and for the Ohio Hockey Project, where he coached Junior A players. In addition, he has also served as an evaluator with USA Hockey Development.
As an athlete O'Malley was a hockey player and golfer at St. Ignatius High School and is a member of the St. Ignatius Hockey Hall of Fame. He also played hockey as a post graduate for Gilmour Academy and the Syracuse Stars of the EJHL. After four years on the team at the College of Brockport, O'Malley pursued a professional career with the Wheeling Nailers of the East Coast Hockey League and various minor league teams.
"While he certainly has big shoes to fill, we are confident Coach O'Malley will do just that," noted Interim Director of Athletics Blake Theisen. "He has been a big part of the program's success since he arrived on campus in 2014 and the team will continue to benefit from his talent, work ethic, and experience as a coach, as well as the continuity he provides during this transition."
"I am extremely humbled and honored to be the next head men's ice hockey coach here at Lake Forest College and remain involved in the campus community," stated O'Malley. "I am eager to get started and thankful to the College's administration for giving me this opportunity."
"It has been a pleasure to work alongside Coach Kelliher the past seven years. His vision and values for this program has created a tremendous culture at the rink and in the classroom. I will always be thankful he brought me to Lake Forest College."
"Moving forward we want to continue the tradition of excellence and hold the same values and standards for our program. I will continue to work diligently to provide our players an opportunity to be successful both on and off the ice."
The transition from Kelliher to O'Malley as head coach will occur on June 1.

But, they'll be back to work on their masters degrees...and play hockey.

With the 2020-2021 season having been canceled because of Covid, they both have a year of eligibility left.

Congrats, men, on your bachelor degrees!

Good bye and good luck to the seniors

Graduation is always a bittersweet time.

Excitement is in the air, as the graduates have a whole lifetime ahead of them in family, career, and service.

For this year's graduates, their hockey careers ended prematurely. There wasn't a 2020-2021 season because of Covid protocols. It's unfortunate.

So, we say our "good bye" and wish "good luck" to the four young men who will be leaving Brockport this week, a foursome of student-athletes who played the game the right way and pursued their studies with the same vigor.

We wish them the very best in what the future holds for them and we thank them for the magic and memories they provided as Golden Eagles. There was plenty of that as they were a super-successful crew on the ice. They helped produce two 15-win campaigns which were bested only by 17-win seasons in 1968-1969 and 1987-1988.

The men moving on are...

Ethan and Jeremy Solat: Jeremy joined his brother in the 2018-2019 season and they were a great sibling combo to watch. Ethan amassed 17 goals and 19 assists in his 3 seasons and Jeremy lit the lamp 13 times and assisted on 12 others in his 2 seasons. The Colorado natives were always hustling on the ice and possessed of great energy.

Shane Visnick: He accumulated 5 goals 7 assists in his 3 seasons and was know for being a fantastic defensive forward. The Florida native was a tireless physical force to reckon with, at 6'1" and 220 pounds.

Tyler Williams: Hailing from Rome, NY, he had some quiet numbers (1 goal, 2 assists) which belie his value to the team...he was a defenseman's defenseman who helped keep the SUNYAC's talented forwards at bay. His NCAA success was a testament to his hard work as he had to recover from an injury sustained in the juniors.