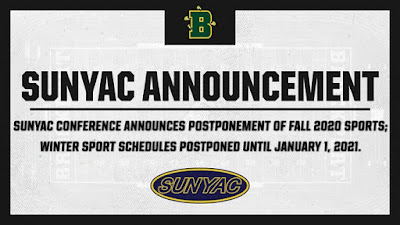 In response to ongoing health and safety concerns, the members of the State University of New York Athletic Conference will suspend fall sports competition. In addition, the winter conference and non-conference schedules will be delayed until January 1, 2021.

Despite these changes for Brockport athletics this fall, the campus community recognizes the importance of athletics participation to its student-athletes. Administrators and coaches have developed plans to engage student-athletes safely in small-group activity through in-person practices and instruction, strength and conditioning training, leadership training and team building activities. All students on campus will also have access to recreational and wellness opportunities, and the fitness facilities will be available in accordance with all New York State guidelines and campus protocols.

"The decision to suspend fall sports was made with the safety and well-being of our student-athletes and campus community top of mind," said SUNY Brockport President Heidi Macpherson. "Sports, like our fine arts performances, are part of the fabric of college life, and I know how disappointing this must be to our players, coaches, staff, and our fans. But we will get through this, and I look forward to the day when we can again cheer for our Golden Eagles."

Division III student-athletes will not be charged with participation for the 2020-21 season if their team can complete only 50% or less of the sport's maximum contests/dates of competition due to the ongoing impact of the COVID-19 pandemic. The Division III Administrative Committee approved a recommendation from the Division III Committee on Student-Athlete Reinstatement to provide a blanket waiver in all sports that are unable to reach the 50% threshold, providing student-athletes with the option of extending their participation. 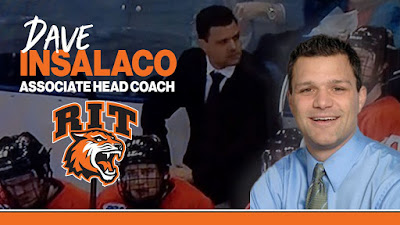 Insalaco's duties include overseeing the Tiger defenseman and penalty killing efforts. He most recently mentored Adam Brubacher (Elmira, Ontario/Powell River Kings), who graduated in May a two-time AHA All-Star and was one of only six defenseman in the nation over the last four years to eclipse the 100-point plateau.

Continued Wilson, "Dave's work with our defenseman over the years has led to numerous all league selections, highlighted by current Vancover Canucks assistant Captain Chris Tanev, who was named Atlantic Hockey Rookie of the Year and an All-Tournament Team member during our 2010 Frozen Four run. He has a great hockey mind and, with his work ethic, will be a great head coach at some point down the road."

"I am truly appreciative of the opportunity provided to me by Wayne Wilson, (Executive Athletic Director) Lou Spiotti and (Senior VP for Student Affairs) Dr. Sandy Johnson," Insalaco said. "As a kid growing up in Rochester who attended his first hockey school at RIT, it has been a dream come true to coach here.  It has been a remarkable 12 seasons and I am proud of what our staff has built in such a short period of time. I am excited for the start of the season and I look forward to helping facilitate our program's continued success."

In 2009, 2011, and 2012, Insalaco coached at the USA Hockey Select Under-17 and Under-16 Development camps in Rochester with several of the nation's top collegiate coaches and was tapped to coach in the 2011 Select 17 All-Star game. Insalaco also served as a guest coach for the Washington Capitals prospect development camps prior to their Stanley Cup in 2018.

Insalaco's arrival at RIT coincided with one of the winningest stretches in program history. The 2008-09 season saw the Tigers finish with a 23-13-2 record to clinch the second seed for the AHA Tournament. The following year, the Tigers won their first AHA Championship and made its Cinderella run to the Frozen Four to finish with a program-record 28-12-1 mark.

Insalaco came to RIT after spending two seasons (2005-07) with the Green Bay Gamblers of the United States Hockey League, including half a season as head coach and general manager. During his tenure with the Gamblers, he coached several players who went on to standout RIT careers, including Cameron Burt, Taylor McReynolds, Sean Murphy and Chris Saracino. He also coached defenseman Derrick LaPoint, who was a 2006 draftee of the Florida Panthers.

Insalaco played two years of professional hockey for the Adirondack IceHawks of the United Hockey League from 2000-02, recording 31 points (10 goals, 21 assists) in 128 career appearances. He was voted both the "Unsung Hero" and "110 Percent" Award winner by the fans following his first season as the IceHawks won the Northeast Division title.

Insalaco also completed a master's degree in education from Brockport. The Greece, N.Y. native currently lives in Fairport, N.Y. with his wife, Erika, and children, David and Clare.

Insalaco's sister, Kim, was a member of the 2006 United States Women's Olympic Hockey Team which earned a bronze medal in Turin, Italy. 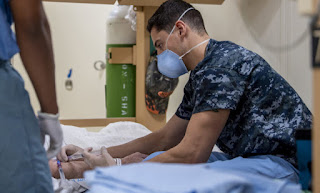 Ensign Dylan Shapiro, from Rochester, treats a patient in a ward aboard the hospital ship USNS Mercy (T-AH 19) on April 13. Mercy deployed to Los Angeles, California, in support of the nation’s COVID-19 response efforts, and will serve as a referral hospital for non-COVID-19 patients currently admitted to shore-based hospitals. This allows shore-based hospitals to focus their efforts on COVID-19 cases. One of the Department of Defense’s missions is Defense Support of Civil Authorities. DoD is supporting the Federal Emergency Management Agency, the lead federal agency, as well as state, local and public health authorities in helping protect the health and safety of the American people.

Former Brockport assistant coach, Stephen Mallaro -- who was with the team in the 2014-2015 and 2015-2016 seasons -- has assumed the head coaching role at the Albany Academy 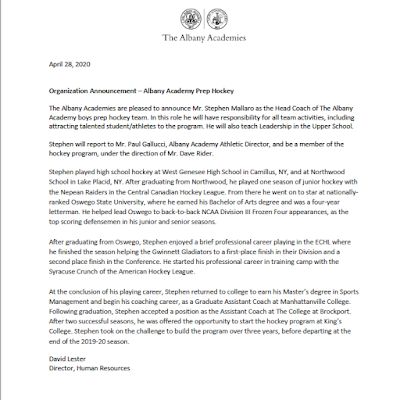