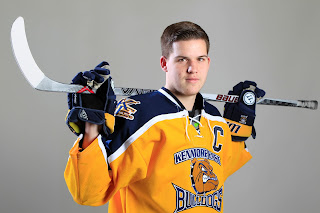 Klimowicz is coach of the year

Bob Klimowicz played hockey at Brockport. Since then, he's been coaching high school hockey. He has been named the 2017-18 All-Bee Girls’ Hockey Coach of the Year by the Bee family of newspapers in WNY:

Brockport alumnus Meredith is SUNYAC Coach of the Year

The State University of New York Athletic Conference (SUNYAC) is proud to announce the recipient of Men's Ice Hockey Coach of the Year for the 2017-2018 season. This year, Fredonia head coach Jeff Meredith (who is an alumnus of Brockport) has been voted to receive this honor.

In his 30th season as head coach for the Blue Devils, Meredith led his squad to an overall record of 13-11-4, and a fifth place SUNYAC seeding entering playoffs with a conference record of 7-8-1. The team had a triumphant SUNYAC playoff run, upsetting No. 5 seeded Plattsburgh in the Quarterfinals, 4-3, then upsetting No. 1 seeded Oswego in the semifinals, 3-1, to advance to the SUNYAC championship game.
Meredith entered the 2017-18 season ranked 45th on the all-time NCAA wins list, and earned his 400th career victory in a 7-4 win over visiting Plattsburgh on December 2. This marks Meredith's third SUNYAC Coach of the Year honor.