The Fort Wayne Komets of the ECHL announced Monday that four players have been added to the preseason roster. Defenseman Curtis Leonard and forward Mason Baptista have agreed to terms and will be returning to the Fort Wayne fold for 2016-17. Also rookie forwards Daniel Erlich and Chase Nieuwendyk have inked agreements to make their pro debuts with the Komets.

Nieuwendyk, 25, finished a four-year NCAA-III collegiate career with Brockport in the SUNYAC (State University of New York Athletic Conference) last season leading Brockport for the second straight year in goals with 14. The rookie forward also led the team with 37 points for the third consecutive season.

Click on the images below to expand their size... 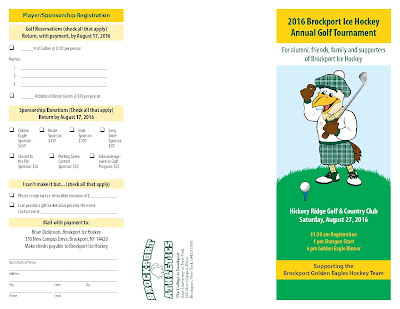 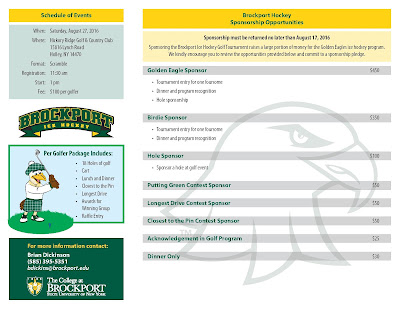 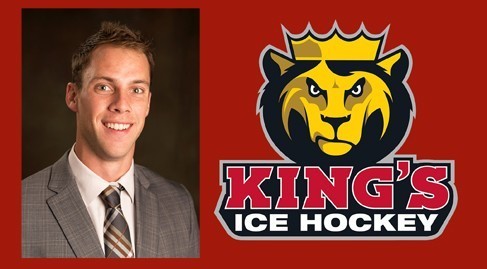 As a collegiate ice hockey player, Stephen Mallaro helped lead Oswego State University in upstate New York to back-to-back NCAA Division III National Tournament "Frozen Four" appearances in 2010 and 2011. Now, five years later, four as a collegiate assistant coach, Mallaro will take on the most unique opportunity of his career after being named the head coach of the new men's ice hockey program at King's College. Mallaro will start his new position on August 1 according to King's Director of Athletics Cheryl Ish.

On February 25, King's announced the addition of both men's and women's ice hockey programs with each sport slated to open competition in 2017-18. With head coaches of both sports scheduled to be hired this summer, King's will provide both the men's and women's programs with a full year of recruiting before entering competition. Mallaro is the first of the two head coaches to be hired and will take on the task of building the Monarchs from the ground up.

"We are thrilled to welcome Stephen Mallaro as the very first men's head ice hockey coach at King's College," Ish stated.  "Stephen came across as a great fit for King's the moment he stepped on our campus and that sentiment just grew throughout the entire interview process.  His commitment to the Division III philosophy, combined with his experience and a very competitive spirit, resonated with the search committee.  I am confident that Stephen will do an outstanding job with our men's ice hockey program.  He will have a busy year ahead in recruiting our first team of student-athletes, but I know he will represent King's in a first-class manner. We feel confident he is the person with the vision and work-ethic to build our program from square-one. With Stephen leading the program, we are all excited about this new chapter in King's College Athletics. We really feel we found an outstanding young coach in Stephen Mallaro and are thrilled he will become a part of the King's Community."

Now, at 29 years of age, Mallaro will have the rare challenge of building a collegiate ice hockey program from the ground up. Revolution Ice Center in nearby Pittston will serve as King's primary venue for practice and games.

"It's a dream come true," Mallaro said of being named King's first head coach. "To be able to start your own program and put your stamp on something is very special. I know the coaching business is not an easy mountain to climb, but with the support of good people, good things will happen. King's College is a very unique place. The campus is a very tight-knit community where you feel at home and everyone knows one another. The athletic department is fully supportive of the new ice hockey program and everyone I had contact with is excited to bring hockey to King's. I was very impressed with the people that I met on my visit and the values that they help bring to King's. I was able to interact with a number of administrators and coaches that are proud to be a part of the King's College family and that has me excited about joining their family. I would also like to thank Cheryl (Ish) and the search committee for putting their faith in me and giving me this tremendous opportunity."

As a collegiate player, Mallaro enjoyed a distinguished career as a four-year letterman and two-year starter at nationally-recognized Oswego State.

As a junior in 2009-10, he was a starting defenseman for the Lakers, who finished 26-3 overall and 15-1 in the SUNYAC, while winning the conference championship. Oswego earned an automatic berth into the NCAA Division III National Tournament and advanced to the Frozen Four where the Lakers fell to St. Norberts 4-3. Mallaro was the top-scoring defender for the Lakers that season, registering 17 points on seven goals and 10 assists.

As a senior team captain in 2010-11, Mallaro helped lead Oswego to a 23-5 record while again going 15-1 in the SUNYAC. After being upset in the SUNYAC Tournament semi-finals, Oswego received an NCAA national tournament at-large bid and once again advanced to the national semi-final round, dropping a 5-3 decision to Adrian College of Michigan. Mallaro again topped all Laker defensemen with 19 points on four goals and 15 assists.

Over the course of his four-year career at Oswego, Mallaro played in 68 games and totaled 38 points on 11 goals and 27 assists.  He was a first-team All-SUNYAC selection in 2010, then was named second-team all-conference as a senior in 2011.

After graduating from Oswego, Mallaro enjoyed a brief professional playing career. He played in the ECHL with the Elmira Jackals, the Trenton Titans, and finished the 2011-12 season as a member of the Gwinnett Gladiators, helping the team to a first-place finish in the Southern Division of the ECHL and a second place finish in the Eastern Conference. He also had a 10-day stint with the Syracuse Crunch of the American Hockey League (AHL).

Mallaro then began his coaching career as a two-year graduate assistant coach at Manhattanville College, earning his Master's degree in Sports Management in 2014, before joining the staff at Brockport State. At Manhattanville, he coached ECAC West "Co-Defensive Player of the Year" Anton Racklin, who went on to earn third-team Division III All-American honors in 2014.

As a first time head coach at a brand new program, Mallaro is well aware of the many responsibilities that will be necessitated by not only developing a program, but recruiting the right student-athletes who will become part of building a tradition at King's.

"I will be looking for student-athletes who will be the right fit for King's," Mallaro noted. "As a coach you never sacrifice character and we will know exactly what we are looking for.  We want to recruit elite people who are highly-competitive and want to be a part of the King's College culture. Academically, we will look for good students who will excel in the classroom and be good role models representing King's. Coaching is all about the process of developing people and we want quality student-athletes that want to be a part of the journey.  It is important to create an identity for the program and to familiarize the hockey world with the King's College brand.  I also am looking forward to meeting other coaches and staff members at King's and building a professional relationship with them."

Mallaro was practically born on the ice as he began skating at age three and first played competitive hockey at four years old. After continuing through the youth ranks he played three years of ice hockey at West Genesee High School in Syracuse, NY. before moving on to play at Northwood Prep in Lake Placid, N.Y. from 2004-06. He then spent a year playing junior hockey with the Nepean Raiders in Nepean, Ontario before moving on to his collegiate career at Oswego State in 2007-08. For Mallaro, each step along the way helped shape him for his first head coaching job.

"I have to thank my family for all the support they have given me over the years, Mallaro concluded. "I know it wasn't easy on my brother and sisters all the times my parents would be taking me to hockey games all over the country. I especially have to thank my mother for all the love and support she has given me throughout, not only during my playing days, but also my entire coaching career. To my dad, he always believed in me. I would also like to thank Frank Colabufo and Scott McDonald, my high school hockey coaches at West Genesee, for the development and encouragement to continue to get better every day. Thanks also go out to close friend and mentor David McNab, the Vice President of Hockey Operations of the Anaheim Ducks, for believing in my character, and to Mark Morris, my coach at Northwood who is now the head coach at St. Lawrence University, for influencing my style of coaching and passion for the game. I also want to thank Oswego State head coach Ed Gosek for recruiting me and giving me the opportunity to play college hockey, as well as Coach Arlen Marshall at Manhattanville and Coach Brian Dickinson at Brockport for providing me with coaching opportunities that led to this moment. Manhattanville director of athletics Keith Levinthal was also another person who did a great deal to help me. To all the people who have helped my coaching career move in the right direction and continue to encourage and support me, thank you. There are so many people that have been such a positive influence on my career and I am grateful for everything they have done for me."

When ice hockey officially begins play, King's will field one of only four NCAA Division III men's and women's programs in the entire state of Pennsylvania.  King's will join Neumann University, located in Aston in the Philadelphia area, Lebanon Valley College in Annville, and Chatham University in Pittsburgh as NCAA Division III varsity ice hockey members.  Chatham has had a women's program since 1996 but will be adding men's ice hockey in 2017-18.

"With the popularity of our own Wilkes-Barre/Scranton Penguins and the influx of local high school programs, we at King's are thrilled to be part of the growth of ice hockey in Northeastern Pennsylvania," Ish concluded. "Being the first local college to field a varsity ice hockey program is exciting and there has definitely been a buzz since we announced we were adding the sport back in February. We look forward to starting this new chapter in King's College history."

King's conference affiliation for both men and women's teams have yet to be finalized.