Earlier today the Athletic Department posted the 2008-2009 membership application for the Golden Eagle Society. For eight years running, the GES has given friends of the College a chance to support Brockport sports and even attend the games at a discounted rate. There are various donation levels ranging from $25 to $1,000.

For Brockport hockey fans who are not students - parents, alumni, townsfolk - the $25 membership is a steal. By joining at that level you get a pass for two to all athletic events. At a few bucks a ticket at the door, the pass pays for itself after a few games.

THE SITE NOW HAS A REAL WEB ADDRESS

I've streamlined the URL for this blog.

HOCKEY HELPS AT "MOVE IN DAY"

More than 300 faculty, staff and students - including the hockey team - turned out to help with the heavy lifting as part of the “Move-in Day” tradition.

“Move-in Day” began a decade ago when Richard Lair, The College at Brockport director of facilities maintenance, returned from moving his son’s belongings up four flights of stairs at another college. Lair thought it would be a good idea to have College staff on hand to lighten the load. The idea has since become a College at Brockport tradition and this year’s helping hands included those of President John R. Halstead as well as College vice presidents and staff from both the academic and administrative areas.

All of the hockey freshman who had moved in early (Adam Shoff, Oliver Wren, Josh Roarke, James Cody) showed up to help out the returning players with their community service project.

Here is a clip from Rochester's News 8 Now about Move-In Day. Near the end they interview Adam Shoff:
http://rochesterhomepage.net/media_player.php?media_id=56771

On Saturday the team helped out at the Back-2-School Bash run by the Brockport Free Methodist Church.

Mark Digby said it was a really good time and the guys seemed to have enjoyed themselves while working in their hockey clinic. One of Brockport's newest additions, Oliver Wren, even managed to get into the dunk tank for a few minutes and Sean O'Malley knocked him in on his first throw. 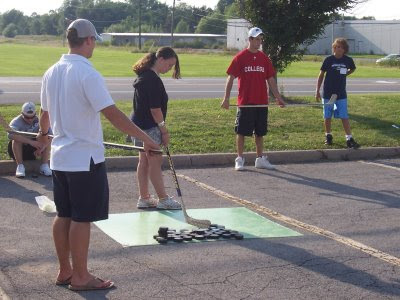 Rick Stanek (on the left) and Ian Finnerty (on the right) teach a girl how to shoot. 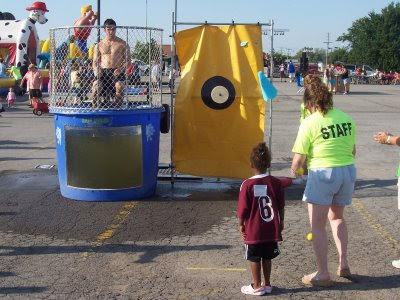 Oliver Wren in the dunk tank

Assistant Coach Mark Digby reports that the ice rink in Tuttle North is almost ready for the semester. The compressors were turned on in the rink last wednesday and the frost has begun to form. The ice making process begins Thursday around 4 PM and it should be skateable by Labor Day.

With four-on-four summer hockey coming to an end recently, local kids didn't have to wait long to get back on the ice. This week marks the first appearance of the Barnes Hockey School at the Simcoe Recreation Centre, where 43 kids are back on the ice, readying themselves for the upcoming season. The camp has been run throughout southern Ontario in the past, and the move to Norfolk has been a smooth one.

"It's been an absolute joy to work with the kids here," said co-head instructor Ryan Barnes. "The facility people will do anything for you and it's been a great environment for us to work in. The kids and the families have been wonderful so it's been a real positive experience so far."

Ryan and his cousin Scott Barnes are the head instructors, drawing experience from all over the world. As a left winger, Ryan has suited up with the Detroit Red Wings, and several OHL and AHL teams. Scott is well travelled, having played in leagues in Scotland and Great Britain.
Shawn Smith from Mind of Muscle is handling the off-ice training portion of the camp, making it even more of a unique experience for the skaters.

"The environment we try to create is hard work and we want them to have fun at the same time. We bring Shawn (Smith) who's worked with guys in the NHL. He really brings a special element to the camp," said Ryan, who has been to development camps overseas. We've got a lot of positive comments from parents (about) slowly introducing the younger kids to the off-ice element of it, that's been big."

Ryan said his own experiences with hockey schools have had a big effect on his camp. "I've taken little bits and pieces from different places (where) I've learned things. I've been to every power skating school just looking for that edge as a player and always kept notes in the back of my mind and really turned it into our own brand here."

The camp has also enlisted the services of Port Dover's Adam Shoff, who will attend the University at Brockport on a hockey scholarship this fall. Shoff has been a teacher at the school before, but doing it in his own backyard has meant a little more.

"It's been nice to give back to the game and, for me, the area that I came from. It was a camp like this that gave me the opportunity and insight to want to go to the NCAA," he said. "Not every kid here is going to want that dream, but it's nothing that you can't achieve if you work hard. Hopefully a few kids will come out of this and it will give them an opportunity to see they can go somewhere if they really work at it."

As for the players, the camp makes for a great chance to get back on the ice before the upcoming season begins

"Because I love to play hockey," Brody Bridgwater, 10, of Port Dover said of his reason for going. "It's fun -- a lot of work."

During the third day of camp yesterday, the younger group was still a fired up bunch, loving being at the rink and all that goes along with it.

"They've got a lot of energy which is a good quality to have for wanting to get better as a hockey player," said Barnes. "We try to create an environment where the kids are going to work extremely hard and be better hockey players and, at the same time, have a lot of fun. I think we've had a pretty successful week so far. We've got two days to go and we'll keep on these guys and send everybody home happy."

Parents have certainly been pleased with the results.

"That's the best compliment we can get, when Mom and Dad say the next day, 'They were so tired last night. Thank you,'" Barnes said with a laugh. "When we're hearing things like that from parents, we know that we've done our job. That's been a common theme for sure."

Josh Evans, nine, of Hagersville, put it best when he said that his favourite part of the camp was simply, "Going on the ice."

The College at Brockport Hockey team is participating in the Back-2-School Bash scheduled from 3-9 pm, Saturday August 23 at the old Wal-Mart Plaza parking lot on Route 19 in Brockport. The event, sponsored by the Brockport Free Methodist Church includes a full afternoon of activities and entertainment for Brockport area youth and culminates with a fireworks show at the Sweden-Clarkson Recreation Center.

Members of the hockey team will be staffing a hockey clinic for the children from 3-6 PM. Additional activities at the event include live entertainment, clowns, a reptile show, magic acts, a dunk tank, inflatable activities, a free back-to-school haircut and a variety of food vendors. There will also be an opportunity to have your children finger printed sponsored by the National Center for Missing and Exploited Children.

For additional information and a schedule of the events go to www.brockportfm.org

A SOLID YEAR FOR BROCKPORT RECRUITING

I received an e-mail yesterday that Brockport has recruited Tyler Davis, a defenseman from the Syracuse Stars, for the 08-09 season, adding to the list of recruits provided in an earlier blog post.

As last season closed out, the team and the fans were left wondering what the future held, what with 12 seniors leaving the team. Well, the future looks bright. Dickinson and Digby have done a great job in filling the roster and the new recruits and transfers bring some definite quality and character to the Golden Eagles.

Davis is over 6' tall. He, along with fellow recruit Gregg Amato (6'2") bring the height and size needed to hang with Oswego's and Plattsbugh's taller forwards. Last year, Brockport's defense was its best since the 1974-1975 season and this looks to continue (if not improve) with these additions.

With goalies Van't Hof and Spence graduating, Brockport was left with only one goalie. Now they have a good back up goalie in Oliver Wren, who had some solid numbers in his last year for the Oakville Blades...a .900 save % and a 3.35 GAA.

The offensive picks have been great, too. James Cody and Thomas Galiani were point-a-game forwards last year in the AJHL and Ian Finnerty was close to that level. They'll bring some much needed firepower to the team.

And, last but not least, Ray Tremblay brings character and leadership to the game. As you read here, he's playing hockey despite what should have been a career-ending injury. It is hoped that his will power and determination rubs off on others.

These guys, and others, should provide some great hockey moments in the years to come. All in all, a very good class of recruits.

You can support the Golden Eagles ice hockey team and have an enjoyable day on the course by participating in the second annual Brockport Hockey Golf Tournament. The event takes place on Saturday, September 27th, and is quite affordable at $75/person ($125 with sponsorship).