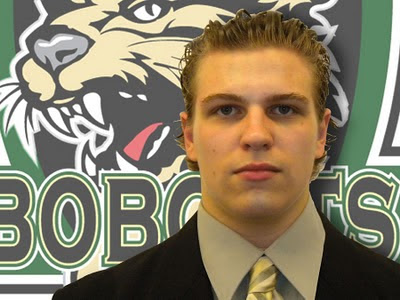 Hockey fans of Canadian heritage are quite familiar with Bob McKenzie, a fixture on TSN's coverage of ice hockey (For Americans who are too far from the border, TSN is Canada's version of ESPN).

It's not too often someone of hockey prominence like McKenzie drops the name of "Brockport" or alumnus "Steve Seedhouse", he of the 15 goal season a few years back.

One of his Twitter followers asked him about which of the Whitby (Ont.) teammates of his son, Mike, went on to play a higher level of hockey.

This is a trailer, produced by Cam Noble, for the Brockport Eagles' new video coming out at the end of March called 60 Miles a Day...

He may coach for one of our conference rivals -- Fredonia -- but Jeff Meredith has strong Brockport roots. This article from last week's Fredonia Leaders looks at his hockey career: 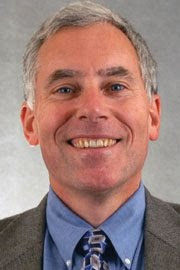 A Coach for the ages: Jeff Meredith

Fredonia State is without a doubt a hockey school. The varsity team is arguably the school's most popular team and it makes sense with the amount of success they've had in the past two decades. From the Pink the Rink games to consecutive NCAA Frozen Four appearances and beyond, Fredonia State hockey has been and continues to be a captivating team for both college students and the community.

Behind any great team, there is a great coach pulling the strings. For the Blue Devils, Head Coach Jeff Meredith has been the maestro behind Fredonia State's rise to relevance on the ice. He has been a mainstay behind the bench for the varsity hockey program for a staggering 23 seasons, coaching each Blue Devil team except for the first one during the 1987-1988 season.

Behind every great coach, there is story that tells his path to greatness. Before his 23 years of coaching at Fredonia State, before he ever considered becoming a hockey coach, Meredith and his family were living in the city of Rochester, NY. In Rochester he had the chance to gain an admiration for the game of hockey, following semi-pro AHL hockey in the Rochester Americans as well as NHL hockey in the neighboring city of Buffalo with the Sabres.

"I grew up in Rochester, so I was a big Rochester Americans fan," Meredith said. "Being a Western New York guy, I liked the Sabres and that was back when they were going to the Stanley Cup against the Broad Street Bullies of Philadelphia."

After living in the city most of his life Meredith, along with his family, moved out to the suburb of Churchville at age 15. He attended high school at Churchville-Chili Senior High. Following high school graduation, Meredith attended Monroe Community College and earned his associate's degree in criminal justice. Following his two years at MCC, Meredith decided to take a year off from education to decide what area of academics he wanted to pursue.

After his year off, a rejuvenated Meredith attended Brockport in the fall to pursue a degree in physical education. He graduated from SUNY Brockport in 1982, immediately applied to graduate school and was accepted at Ohio State University, where he earned his master's degree in sport management.

"In my last year at Brockport, I had run out of eligibility. I was helping coach the goalies at Brockport and I thought it might be something I'd be interested in," Meredith said. "I ended up getting a grad-assistant coaching position at Ohio State and then I realized that I wanted to make a career of this."

After graduating with his master's from Ohio State, Meredith returned to Brockport and ran the ice rink for a year. He also served as an assistant hockey coach for the team.

The following year, in 1984, Meredith was presented with an opportunity to become an assistant head coach at Hamilton College.

"The head coach there, Phil Grady, had just taken over the program there and when I met Phil Grady, he seemed to be a guy that if I wanted to get into this profession for real, I'd better get in with a guy who really knew what he was doing and knew all about it," Meredith said. "It ended up being a great four year experience for me."

In 1988 a head coaching position became available at Fredonia State and Meredith applied and got the job. He inherited the program after the Blue Devils first season of college hockey, a campaign in which they went 0-22 and lost to SUNY Plattsburgh in a regular season game 25-0. As the first full-time coach that the program had, Meredith went to work with the support of the college and community behind him.

With a plan of action heavily focused on recruiting athletes coming out of junior hockey leagues, Blue Devils hockey began to reap the rewards of Meredith's efforts.

"We worked hard at our recruiting. We went after kids that were good people, who had good character and were hard workers," Meredith said. "We felt that we didn't necessarily need the most talented guys in the world, but if we could work hard and be disciplined and just play together we would be a pretty good team."

During the mid-1990s, the Fredonia State Blue Devils were one of the first teams in the conference to start recruiting hockey players from the junior hockey leagues. This gave the Blue Devils a distinct size, skill and experience advantage over their competition.

Slowly but surely, Meredith helped put the Fredonia State program on the map. In the 1990-91 season he was recognized for his efforts, earning his first SUNYAC Coach of the Year award. Then in the mid-1990s, the scrutinizing recruiting process landed the program some key players and the program catapulted into contention.

After winning his second SUNYAC Coach of the Year award earlier in the season, the Blue Devils advanced to the NCAA Frozen Four with an undefeated record in 1993-94, where they lost to eventual champion University of Wisconsin-River Falls in the semifinals. Back again the next year in 1994-95 they were still unable to pull out the victory, losing in the championship game 1-0 to Middlebury College. They continued to enjoy success throughout the mid to late 90s but hit a bumpy stretch in the early 2000s.

"After we had the success in the mid-1990s of going to the Final Fours, it took a while after we didn't get there to come to grips with that," Meredith said. "I always explain it to people like this: imagine for two years you're eating these big, chocolate covered brownies and then all of the sudden you're eating like a saltine cracker. It was that kind of difference."

Despite the setbacks in the early part of the decade, Meredith has had his teams in contention year after year. Fredonia State has only had a few losing seasons in the decade and besides the 2008-09 season, they have been particularly strong in recent years.

When asked what he thought was his most significant achievement as a coach, Meredith was non-committal to a certain win or moment.

"If you have to boil it down to one thing, your most notable thing, it would probably be some of the relationships you've had over the past 23 years," Meredith said. "I don't think you could just pin it on one win or a title or something like that."

It's apparent as soon as you walk into his office in Dods Hall that Meredith has a deep appreciation for the game. His walls are littered with plaques of hockey players, coach of the year awards, newspaper clippings and team photos of past Fredonia State squads. With an aggressive recruiting process, an eye for hard-working individuals with strong character, a great tradition of winning and a genuine love for the job and the people around him, Jeff Meredith is truly a coach for the ages.

Earlier this week, former Brockport stand-out Mike Gershon was part of a trade in the ECHL. The deal has been revised and he is staying put...

The Wheeling Nailers announced Wednesday that the recent trade agreement with the Trenton Devils has been revised. The new deal features the Nailers receiving forward Jeremy Akeson from the Devils for future considerations. As part of the new deal, defenseman Mike Gershon will be returned to Wheeling, while defenseman Justin Coutu will return to Trenton.

Gershon has registered 18 points (4g, 14a) in 49 games played this season with the Nailers. The Sparta, NJ native totaled 35 points (7g, 28a) in 72 games played last season with the Port Huron Icehawks of the IHL. Prior to his professional career, Gershon was a four-year player at Suny-Brockport where he amassed 43 points in 101 career games.