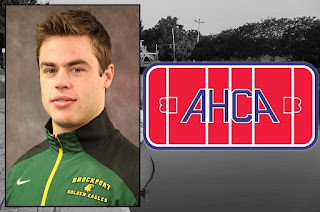 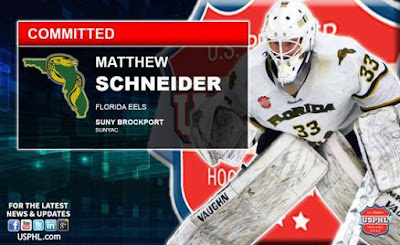 The Florida Eels have announced that goaltender Matthew Schneider has made a commitment to play at Brockport. Here is their news release...

Matthew Schneider was one of the if not the top goalie all year long in the USPHL Elite division. His numbers speak for themselves by leading the league in several categories, most notably wins with 21 and a save percentage of .945%. He was even better during the playoffs. He led playoffs in wins with 6 and goals-against posting a 1.43 GAA. He also led the playoffs in shutouts with 2. He was second in minutes played with 420.00 and save percentage with a .948%.

GM Frank Scarpaci opined that he has been one of our strongest recruited players this season. Matthew was in the unenviable position to have a number of strong NCAA Division 3 college coaches recruit him throughout our season for the next four years. But there was no question Brockport was his first choice. Matt looks forward to playing for the Golden Eagles under coach Brian Dickinson  who has been at the helm of SUNY Brockport since the 1996-97 season.

Matthew said he looks forward to playing in the very prestigious SUNY conference. Coach Dickinson and his assistant coach Stephen Mallaro have done a very impressive job building the hockey program at SUNY Brockport and he looks forward to becoming part of their team and making a solid contribution to the program.

The following is the scouting report on Matthew:

Matt’s speed and ability to read the game are his two biggest assets. His ability to read the game allows him to shutdown odd man rushes and penalty situations. His positioning plays allows him to track pucks to his body making it easier to control rebounds. Matt’s compete level is very high which allows him to steal games for his team. He has great vision to see and track the puck. He communicates very well with his defenseman.”  Matthew has consistently been one of the top netminders in the USPHL over the last several years.

"Matthew is a top notch player and an even better person, he will be able to adjust and excel on the ice and in the class room very quickly. Matthew is very focused and mentally driven to succeed at anything he chooses.” Coach Bloomingburg states.

GM Scarpaci states that we scouted Matthew for two seasons and when he became available we were sure and quick to sign him last season. We are very glad we did and trust the coaching staff at SUNY Brockport see the same tangible and intangible qualities as we saw in him. We are very proud of Matthew and wish him the best in his college endeavors. He is not only a solid goaltender but also an extremely bright young man with a tremendous future in whatever career path he chooses.

At this week's NCAA DIII Frozen Four in Lake Placid I'll be cheering on Geneseo, something that I'd never thought I'd say in 23 seasons of being a Brockport hockey fan. But these guys are something special to get this far after having a teammate (Jay Stephanik) see his career come to an end in November due to a traumatic brain injury and, then, losing their beloved Matt Hutchinson to murder in January. You often hear the term "team of destiny" bandied about in sports conversations -- Geneseo's hockey team might be one of them. If you don't believe in that sort of hooey, they surely are the definition of a "team", playing as one and overcoming adversity. Good luck, Ice Knights -- you truly deserve to be champions

USCHO.com has posted it's annual All-Rookie Team for the conference. While not officially endorsed by the SUNYAC, the awards are still selected by SUNYAC coaches.

As if you needed any more proof that the future of Brockport hockey is in good hands, consider this: Brockport landed 3 players on the squad.

Tim Kielich, who had the highest point total by a Brockport freshman in 20 years, secured 1 of the 3 forward positions.

And this is awesome: BOTH defenseman positions were filled by Golden Eagles -- Connar Bass and Nicholas Palumbo.

Check out the roster here: http://www.uscho.com/2016/03/05/brockport-places-trio-on-sunyac-all-rookie-team/