Egbert is SUNYAC Goalie of the Week 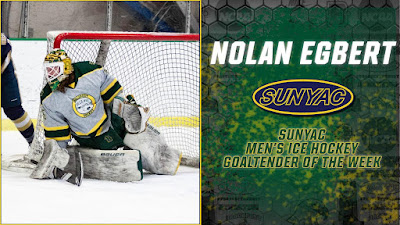 On Monday, Brockport's Nolan Egbert was selected as the SUNYAC Men's Ice Hockey Goaltender of the Week.

Last week Egbert went 2-0 as the starter in net for Brockport, taking wins against Morrisville and Canton. He played the full 60 minutes of both contests, helping the team to a 2-1 week.

In the mid-week game against Morrisville at home, Nolan came up with 41 saves and allowed two goals. He earned a .953 saves percentage in the match, as the Green and Gold earned the 3-2 win.

Then in his next start at home against Canton, Egbert made 25 saves and allowed two more goals. He registered a saves percentage of .926 in the game, as Brockport marched through Canton for the 6-2 win.