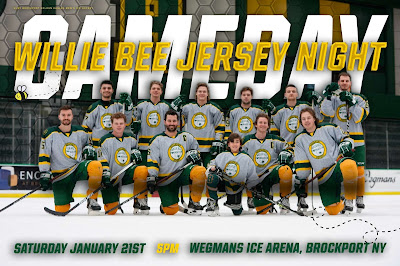 Brockport got off to a hot start after losing to Canton last night in overtime, 3-2. Jake Mendeszoon wasted no time with a top shelf goal at 4:27 in the first, assisted by Connor Galloway and Andrew Harley.

The second period was a big one for the Golden Eagles. Scott Ramaekers scored at 7:16 in the second while Brockport was shorthanded. Ramaekers was assisted by Jordan Rosenbaum and Chris Aarons.

Matt Anastasio kept it rolling with a goal at 8:34 in the second, assisted once again by Harley and Galloway.

Six seconds after leaving the penalty box, Chris Aarons hit the ice ready to play. He scored at 12:51 in the second, assisted by the dynamic duo of Andrew Harley and Connor Galloway.

The Green and Gold held a comfortable 4-0 lead at the end of the second. Galloway started third with an unassisted goal at 1:05. His goal was another short handed score for Brockport in the game, as the team went up 5-0.

Moments later, Manny Sanchez scored his first collegiate goal at 1:41 in the third. He was assisted by Harley and Galloway yet again.

After tonight's performance, both Andrew Harley and Connor Galloway each have earned their 50th career point.

Canton struck back with two goals to finish out the third period, but it was not enough. Brockport dominated at home for the win, 6-2, improving to 8-10 overall for the season.

Nolan Egbert spent 60 minutes between the pipes battling it out, making 25 saves and allowing two goals.