Monteleone is Rookie of the Week 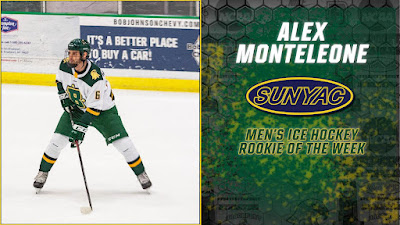 On Monday, December 12th the SUNYAC selected Brockport's Alex Monteleone as the SUNYAC Men's Ice Hockey Rookie of the Week.

Last Friday the Golden Eagles hosted Geneseo for the third annual Teddy Bear Toss Game. Monteleone scored the special event goal that sent hundreds of stuffed animals onto the ice, which were donated to local charities.

In his first season with the Green and Gold, Alex's score was his first goal since joining the program. He has three assists to give him four total points so far.