Brockport loses on the road to Oswego 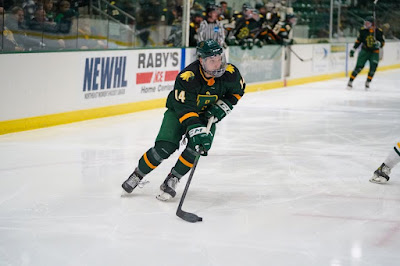 The SUNY Brockport Men's Ice Hockey team fell, 4-1, to Oswego State on Saturday. Brockport now moves to an overall record of 3-4 and 2-3 in conference. Oswego now sits at an overall season record of 6-1 and a conference record of 5-0.

Oswego came out swinging with a goal at 1:26 into the first period. The Golden Eagles went into the first intermission trailing by one, after keeping the Lakers out of the net for the rest of the period.

At 7:07 into the second, Oswego added another goal to its tally on the scoreboard to go up, 2-0.

Shortly after, Adam Beauvais received the puck from across the ice and scored. Beauvais was assisted by teammates Connor Galloway and Jacob Rodrigue.

The Golden Eagles battled hard to close out the second period before heading into the second intermission down by one goal.

At 8:04 into the third period, the Lakers scored to make it a two-goal deficit for Brockport. Just two minutes later, Oswego scored again to create the comfortable, 4-1, final score.

Between the pipes for the Green and Gold was senior Aidan Curry. Aidan spent 59:26 minutes in the goal recording a total of 42 saves and allowing four goals.