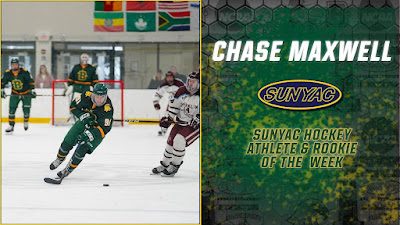 Chase Maxwell from the Brockport ice hockey team was named the SUNYAC Hockey Athlete and Rookie of the Week on Monday.

After being a vital part of Brockport's offense Tuesday against Fredonia, Maxwell recorded his first four-point game of his collegiate career against Franklin Pierce.

The team defeated Franklin Pierce, 8-4, improving to 6-9 overall after beating Fredonia, 4-2, earlier in the week.