Galloway is SUNYAC Rookie of the Week 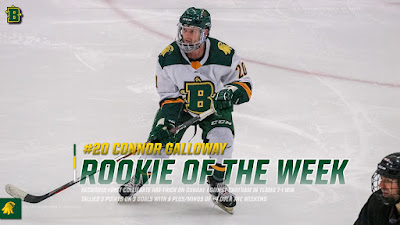 The State University of New York Athletic Conference (SUNYAC) has named Brockport's Connor Galloway the Rookie of the Week in a release on Monday afternoon.

Galloway recorded his first collegiate hat-trick over the weekend in the team's victory over Chatham University in the Skidmore Thanksgiving Invitational. In Sunday's game against the Cougars, Galloway tallied three points on three goals while picking up a plus/minus of +4. This season he's recorded a total of eight points on four goals and four assists with plus/minus of +10.

Galloway is tied for third this season in goals, Tied for fifth in assists and sits alone in fifth in points, as well as being tied for second in the plus/minus category with fellow rookie Jacob King.