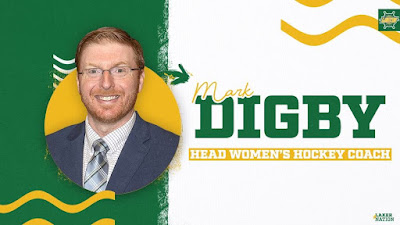 Congrats to former Golden Eagle player and assistant coach Mark Digby!
SUNY Oswego's Department of Athletics announced today that Mark Digby has been named head coach of the women's ice hockey program at Oswego State. Digby was the associate head coach for the team during the 2019-20 season and served as interim head coach the past year.
"This is a special day for me and my family" said Digby. "I am very appreciative and honored to be named the second head coach in the modern era of Oswego women's hockey. I love the progress we have made in my two seasons with the program, and I'm excited to see where we can go in the future."
During Digby's initial season with the women's program in 2019-20, the team showed huge improvements, including the most wins (16) the program had seen since 2016. A strong 10-4-4 mark against conference foes helped propel the women's ice hockey team to a conference title game and a Pairwise Ranking of 16th in the country.
The Lakers placed three on the 2019-20 NEWHL All-Conference Teams, including newcomer Megan Teachout taking home Rookie of the Year honors. Senior defenseman Kate Randazzo was named Scholar Athlete of the Year for the conference and went on to be named Oswego State's Woman Scholar Athlete for 2019-20.
"Mark has been an integral member of the Oswego community for more than ten years," said Dr. Mary Toale, acting Vice President for Student Affairs. "His coaching and service to the community is impactful and his commitment to holistic student success is inspirational. We are thrilled to appoint Mark as the women's ice hockey head coach."
Throughout the pandemic, Digby has remained focused on both the needs of his student-athletes and the campus community. He met weekly with players to check in and build relationships, and recruited eight student-athletes for next season. Digby continued the tradition of fostering academic success, with five players making the President's List and five attaining Deans' List; eight players also made the SUNYAC Honor Roll. He programmed guest speakers, leadership seminars and culture-building activities to increase cohesion and retention on the team. Digby chaired the State Employees Federated Appeal Teddy Bear Toss (which collected toys for local children), volunteered for the COVID hotline and testing center, and served as a Quarantine/Isolation Buddy.
Digby was hired as the assistant men's ice hockey coach at Oswego in August of 2010. During his time as the assistant men's ice hockey coach, the team reached six NCAA tournaments, four Frozen Four appearances and competed for the national championship twice.
Prior to Oswego, Digby was an assistant men's ice hockey coach at his alma mater, SUNY Brockport (2006-10) where he earned his B.S. in physical education (2005) and M.S. in Recreation Management (2008).