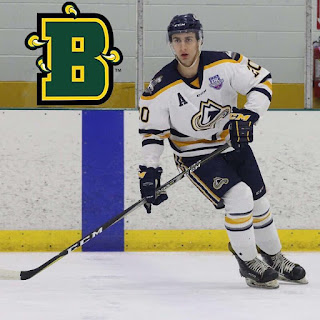 Jake Mendeszoon, a 20 year-old blueliner playing with the EHL's New Hampshire Avalanche, has announced on Twitter his commitment to Brockport.

The 6'4" d-man from Massachusetts is an excellent two-way player. In 43 games last year he had 20 points. In 25 games this season he already has 21.

What speaks to his discipline as a defenseman is his penalty minutes. Six last year. None this year. Amazing.

Here's an article from USA Hockey that discusses his scoring touch:

A great takeaway from the article is the amount of work he puts into his game:

“What allowed me to get off to a good start this season was all the time I put in with coach Cerrella,” Mendeszoon said. “I would skate four to five times a week, just with him personally. I also skated with another coach as well, so I was skating six or seven times a week and doing private lessons.