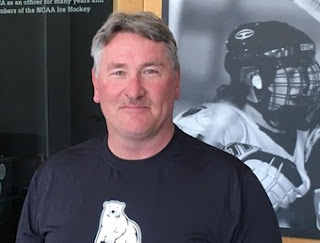 The Bowdoin College Athletic Department has announced the hiring of Stan Moore as assistant men's ice hockey coach.
A veteran coach with over 30 years of experience in coaching, Moore fills the position vacated by Eric Graham, who was named head coach at Johnson & Wales University last month.
A native of Potsdam, N.Y., Moore played collegiate hockey at Oswego State University and professionally with the Enschede Lions of the Dutch Ice Hockey Federation.
Following coaching stints at Potsdam State and Brockport State, Moore coached at Division I with Brown, Providence, Colgate and Union. He was named interim head coach at Colgate in 2003-04, where he led the team to a 22-15-5 record and was named the ECAC Coach of the Year. Since then, Moore had coaching stops at Providence and Colby, where he was the interim head coach for the Mules in 2011-12.
Most recently, Moore was a coach at Kents Hill School and Bridgton Academy and this past winter led Kaltern Rothoblaas Hechte to the Italian Hockey League Series B Championship.