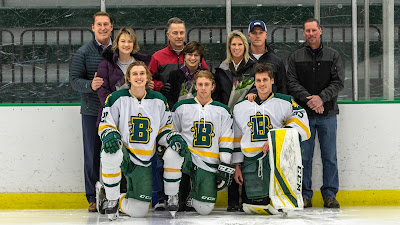 The College at Brockport ice hockey team got back to their winning ways Saturday afternoon, defeating Anna Maria College, by a score of 4-0. With the win, the Golden Eagles improve to 8-4-1 overall, while the Amcats fall to 3-7-3.

Prior to the game, the Golden Eagles honored their three seniors, Bryan Carville, Jake Moore, and Connar Bass.

The Golden Eagles came out hungry for two points in their 13th game of the season. The Green and Gold had a handful of powerplay opportunities early in the first, including a five on three chance but the Amcats PK unit stood tall. Brockport took the one-goal lead late in the first as Jordan Renaud buried his 4th goal of the year with assists to Corey Tam and Ethan Solat.

Brockport got off to a quick start in the second period as Shane Visnick scored the Golden Eagles second goal of the game four minutes in with assists from Jake Colosanti and Robby Flannery. The physicality picked up as the period winded down, both teams seeing their fair share of the penalty box. Brockport held a two-goal lead heading into the intermission.

The Green and Gold wasted little time in the third period as Ethan Solat scored his fourth of the year on the PP, Solat found a rebound off Corey Tam's shot from the point and buried to extend the lead to three. Three minutes later Ethan Solat was at it again, scoring his fifth of the season and second of the game with the assist coming from his twin brother Jeremy Solat. Jake Moore posted his third shutout of the season on 16 shots which ties him for the most shutouts by a Brockport netminder in a single season.