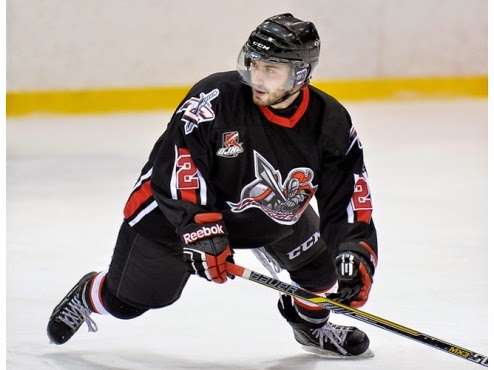 The Woodbridge, Ontario native got his start in the OJHL as a 16-year old affiliate with the Vaughan Kings Midget 'AAA' squad in 2011-12, playing seven games for his hometown Vaughan Vipers, while notching his first two junior points; both assists.

The following year, Palumbo joined the Chargers, where he would spend the next season and a half, setting career bests during the first half of 2013-14 with 13 points in 26 games played.  His value was recognized by the Georgetown Raiders and they would pick him up at the midway point of the season for their post-season drive. The Raiders would march to the South-West Conference Championship Series before falling to the eventual league champion Toronto Lakeshore Patriots.

Palumbo was on the move again this past summer, joining the Toronto Jr. Canadiens d-corps.  In 18 contests, he recorded 5 points before a trade saw him returned to Mississauga.

Palumbo now sits with another career-best 17 points in 43 games as he looks to wrap up his junior career and move on to the next level.