Brockport has picked up some firepower as Jamie Lukas has committed to the Golden Eagles. Here's the news release from the Hartford Wolfpack... 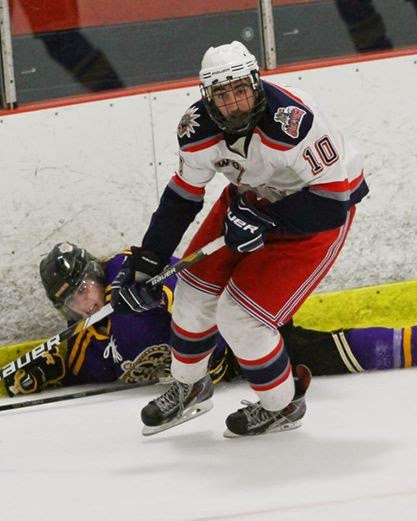 The Hartford Jr Wolfpack would like to congratulate forward Jamie Lukas for his commitment to SUNY Brockport for the 2014-15 season.

The veteran forward has been a catalyst to the high powered Jr Wolfpack offense this season with 39 points in 33 games and will be looking to contribute at Brockport next season.

The Golden Eagles sit just 4 pts from the top of the SUNYAC Div III conference, located in Brockport NY and play their home games at the Tuttle North Ice Arena. SUNY Brockport is coached by Head Coach Brian Dickinson who is in his 18th season behind the bench and his 21st season overall in college hockey. The Golden Eagles are a part of the mighty SUNYAC hockey conference which is one of the top Div III leagues in the country.

"Brockport is getting themselves a good player next season and an even better young man. Jamie has been one of our top offensive players who plays the game hard, posses the puck very well and has a knack for the net. He is going to do a great job next season in for the Golden Eagles and will be a good SUNYAC player. We are very excited for Jamie his dream was to play in that league and it came true for him. We wish him the best in the future," said Chris Cerrella.

The Collegevill, Pa native is very excited to finish the season with the Jr Wolfpack and is very excited in becoming part of the athletic and academic community at Brockport. "I am extremely excited to be moving on and continuing my hockey career at SUNY Brockport next fall. It has always been a dream of mine to play college hockey and now it has come true. I am extremely grateful the Wolfpack organization took me in and allowed this opportunity to become reality for me. I want to thank Coach Cerrella and the rest of the coaching staff for helping me get to the next level. I want to thank my teammates for helping me be the player that I have become this season. Lastly, I want to thank my family for their dedication and support they have given me throughout my career."

Lukas will be joining former Jr Wolfpack players Dave Horan and Ryan Kangas who are both freshman at Brockport and he will be joining a long list of Jr Wolfpack alumni who are currently playing in the SUNYAC Div III college hockey conference. We would like to wish Jamie and his family the best of luck in the future.