GREEN IS BROCKPORT ATHLETE OF THE WEEK 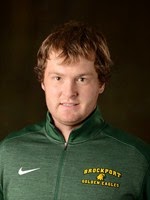 Senior Aaron Green (Mt. Albert, ONT) has been named The College at Brockport Male Athlete of the Week for the week ending December 8. Green has sparked a four game win streak for Brockport’s Ice Hockey team.

In Brockport’s 3-0 win against Buffalo State Friday night, Green stopped 33 shots from the Bengals. Buffalo State put lots of pressure on Brockport in the second period but Green would not succumb to the pressure making 19 saves altogether in the second. The Bengals had a two man advantage late in the third period as they pulled their goalie and were on a power play, but Green proved up to the task making four saves when the power play expired.

Green finished with 22 saves against Fredonia Saturday evening, leading Brockport to a 3-0 victory. He has a scoreless streak of nearly 160 minutes, dating back to the second period of Brockport’s victory against Manhattanville in the title game of the Rutland Herald Tournament over Thanksgiving weekend.