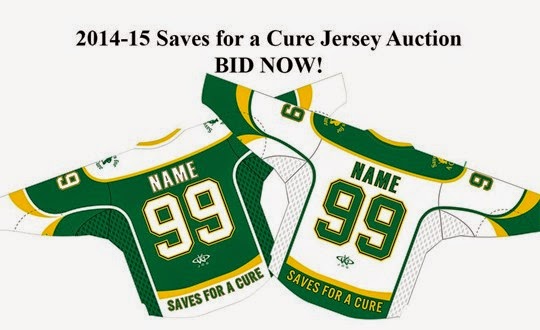 The College at Brockport will host its seventh annual Saves For a Cure weekend on Friday, November 14th and Saturday, November 15th when our biggest rival -- Geneseo -- and one of our newest opponents -- Canton -- come to Tuttle north.

Saves for a Cure is a non-profit, charitable organization started by Todd Sheridan ('11), a former Brockport goalie -- and one of Brockport's all-time greatest players -- and the College's all-time leader in goals-against average (3.07), career wins (29) and saves percentage (.904). He also holds the 2 of the 4 best single season saves percentages for Brockport.

In 2005 Todd was diagnosed with cancer, given a 70% chance of survival and told he’d never play hockey again. Todd beat cancer and the odds and then had quite the career at Brockport, as made evident by his career numbers and the team's only 2 playoff seasons of the first decade of the 2000s -- both of which occurred while he was in net.

With his success story as its backdrop, Saves For a Cure oversees a variety of fundraisers, including the annual Saves For a Cure game, which this year for the first time is games (plural). All proceeds from any Saves For a Cure event or activity go to the children’s cancer clinic at Strong Memorial Hospital.

The highlight of the games is an auction whereby fans can bid on the special jerseys being worn during each of the two games. The auction has begun and will continue through 4 pm (Eastern), Sunday, November 16, 2014. The winners will be listed on the auction web page and will be notified via email. Winners will be able to pick up their jerseys at the Brockport home games December 5-6 or will be shipped and arrive in time for the holidays.

Bidding is online at 2014-15 Jersey Auction page. Bidders will be asked to submit a jersey number, bid amount (minimum bid is $75), and the color of the jersey that you would like to bid on. Bids will be updated as often as possible on the auction page.

Last year, nearly $3,000 was collected from the Jersey auction.

Thank you for your support!