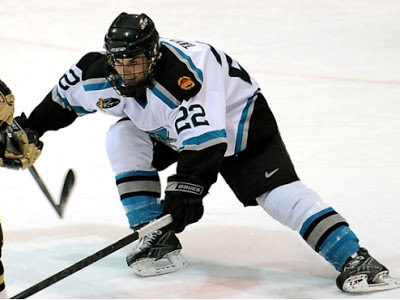 The Port Perry, Ontario native is currently completing his fifth OJHL season after joining the league as a 16-year old member of the Port Hope Predators in 2008-09.  After recording 10 points in 30 games played as a rookie, Taylor joined the Peterborough Stars in 2009-10 and would up his offensive output to 7 goals and 15 points in 34 gams played, while also getting his first taste of OJHL playoff action.  Year three saw Taylor as one of the Stars leaders, finishing second on the club in scoring by notching 50 points in 38 games played, but he would be on the move to Whitby following the 2010-11 season.  After 15 points in 23 games with the Fury, he would be traded to Lindsay, finishing sixth on the Muskies in scoring with 14 goals and 34 points in 40 games played.  Despite missing a large portion of the season, Taylor has already tied his career-high with 15 goals and sits seventh on the club in scoring with 27 points in 24 contests.