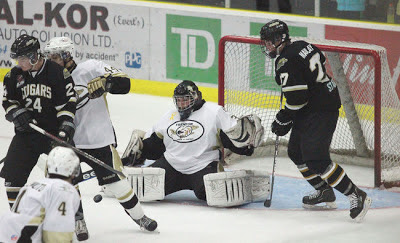 Trenton Golden Hawks netminder Andrew Winsor has confirmed his commitment to join The College at Brockport Golden Eagles beginning with the 2013-14 SUNYAC season.

The 5'8", 175 lbs. native of Cobourg, Ontario joined the Golden Hawks last season, backing-up starter Spencer Finney, and he would not lose a single game in regulation time, posting an impressive 11-0-2 record with two shutouts, a 1.89 goals against average and a .934 save percentage in 14 games played.  The 19-year old entered this season as the Hawks starter and has not disappointed.