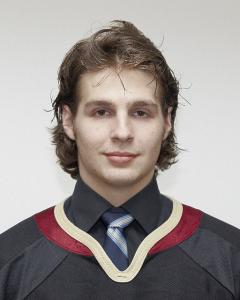 Jesse Facchini who plays for his hometown Mississauga Chargers of the OJHL has committed to play for the College. He'll turn 21 years old at the end of May and this season saw him put up 27 points in 44 games, a solid season that followed a stellar 24-20-44 campaign in 2010-2011.

He played for the Vaughan Kings in earlier seasons where Coach Max Saegert praised him for his "beautiful" skating and being "a kid with natural skill."

"He can play in all situations...regular, power play , penalty kill," he said.

WHAT IS YOUR GOAL IN HOCKEY: Turn Pro one day

HIGHLIGHT OF YOUR HOCKEY CAREER SO FAR: Winning the championship in midget

FUN FACT: became celibate in order to concentrate on education and athletics