GEORGE RICH HAS PASSED AWAY

Word came out today that George Rich has passed away.

He will be missed by the Brockport community. He was someone who bled Green and Gold and loved all of the students, alumni and staff.

George was the face of Brockport to me. For as long as I've been involved with the College (dating back to 1993), he's always been there front and center. He was always at alumni events and sporting events and was a fixture at hockey games. He was a supporter of the program and its students and was really impressed by - and proud of - the sense of charity the team and Saves For a Cure brought to campus.

This bio about he and his wife from the Brockport website offers some insight into his importance to the campus... 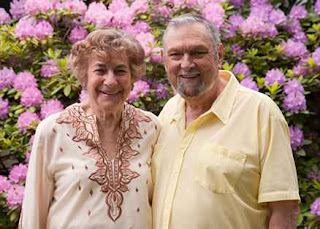 Rosa “Rosie” Rich remembers the blind double date she went on with her husband, George, in 1958 shortly after she arrived in town to take a teaching position at The College at Brockport.

Jeanette D’Agostino Banker ’53, emeritus professor of elementary education, who had attended school with George and was a colleague of Rosie’s, decided to play Cupid and match the two during a night out on the town with her date.

“This is George Rich,” Rosie remembers Jeanette telling her when they picked up George at his home. “And all I said was, ‘Oh.’ ”

Fourteen and a half years to the day they met—and after Rosie traveled across two continents, one of which she lived and worked in for four years—George proposed to Rosie, and the rest, as they say, is history.

“I don’t know if it’s going to work out,” quipped Rosie, who on March 2 celebrated her 38th wedding anniversary with George.

Arguably the most recognizable couple on campus, the Riches have lived a rich life indeed—a life rich with love for students, rich with dedication to their community and rich with giving back to the institution that is a double alma mater for George and a former employer for Rosie.

Longtime supporters of the College, the Riches took their giving to an extraordinary level by designating a major portion of their estate through a planned gift and creating two awards in support of The College at Brockport. In honor of their philanthropy, the College inducted the Riches into the Ernest C. Hartwell Society at the President’s Donor Recognition Dinner this spring.

In addition, the Rosa LaSorte Rich Scholarship will be awarded to an incoming student interested in a career in teaching, while the George Rich Student Philanthropy Award will recognize philanthropy among students and student groups.

George came up with the idea for his award to educate students about philanthropy and encourage them to donate to Brockport after they graduate. He awards $500 to a student or student group, and the recipients also receive $500 to donate to an on-campus philanthropic, educational or cultural endeavor of their choosing.

“I know how great the students are,” said George. “They have big hearts but empty pockets. A lot of students want to give to Brockport but they have debts.”

This year’s recipients include Todd Sheridan ’10, the former hockey team goalie who started Saves For A Cure, which raises $1 for every save a Brockport goaltender makes.

George recalls Sheridan—who battled cancer—telling him that instead of calling himself a cancer survivor, he likes to tell people, “I beat cancer” because it sends a more powerful message.

“This is what happens when you get to know the students,” said George, noting that he and Rosie learn their life stories.