From the NY Bobcats of the AJHL... 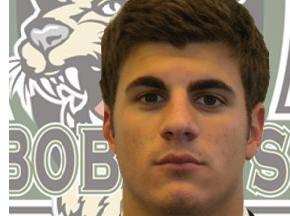 The Bobcats are proud to announce that standout forward, Chris Cangro, has committed to the Golden Eagles of Brockport State College for the 2010/2011 season. Chris joins teammates Stephen Sachman and Joe Reagan, both of whom committed earlier this year to the Golden Eagles. Brockport is a member of the SUNYAC Conference, which is arguably the strongest Division III Conference in the United States. Chris becomes the eighth player from this year’s New York Bobcats to receive a commitment to play collegiate hockey.

Known for his strong skating and goal scoring ability, Chris has been one of the Bobcats’ strongest offensive players the past two seasons, often playing on the team’s top line with Matt Zay and Dan O’Donoghue. An AJHL All-Star this past season, Chris was third in scoring on the Bobcats with a 24-39-63 line in 62 games. Those numbers were also good enough for 9th overall in the AJHL. In addition to being a consistent producer on the powerplay (17 points), Chris was 2nd on the team with a plus/minus rating of +34. His total offensive output during his two-year Bobcats career totaled an eye-popping 46 goals and 58 assists in 127 games, which placed him 3rd overall during that span. Most notably, however, Chris was one of the key components on a Bobcats team that earned two consecutive National Championship appearances and runner-up finishes in the AJHL.

Similar to teammate Dan O’Donoghue, Chris spent almost his entire youth hockey career playing for the Long Island Rebels organization in Dix Hills. He did not play a game at the Tier I level until the 07/08 season where as one of the team’s leading offensive players, he helped lead the Long Island Royals Midget Minors to a New York State Tier I Championship and a National Semi-final appearance. As a Long Island Rebel, he earned a Bantam and Midget Minor NYS Tier II State Championship, which respectively led to Final and Semi-final appearances in the U.S. Nationals. In addition to his travel youth hockey accomplishments, Chris competed for Team Long Island in the 2007 Empire State Games and was a High School Vytra Cup All-Star during the 07/08 season. He also participated in the NYS Select 17 Camp in 2008. Chris also had a very notable high school hockey career. A standout player at Sachem, Chris earned MVP honors as a Junior Varsity player during the 05/06 season and as a Varsity player during the 07/08 season. He led Sachem to Varsity and Junior Varsity Championships during the 08/09 and 05/06 seasons, respectively.

A young man of great character and resiliency, Chris has been forced to endure some very difficult obstacles in his life the past few years. While it has not always been an easy road for him and his family, the inner strength and perseverance he has shown will always act as a catalyst for success moving forward. His work ethic on and off the ice, and his commitment and loyalty to the Bobcats and his teammates are a rare sight in this age of youth sports.

Chris hopes to pursue a career in Sports Management.