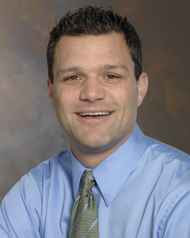 One of the best stories of this NCAA season is the Rochester Institute of Technology's advancement to the Division I Frozen Four.

It should be noted that one of Brockport's best has had a hand in their awesome season.

RIT assistant coach David Insalaco played for the Golden Eagles from '96-'07 to '99-'00 and had a fine career at Tuttle North. He had three seasons of 25 or more points, including a spectacular '99-'00 campaign in which he amassed 36 points on 16 goals and 20 assists and was selected for the All-SUNYAC second team.

David was always fun to watch on the ice: He possessed awesome talent (he was a fast skater with a quick shot) who worked really hard to transform that talent into results. I guarantee he has shared that hardworking approach to the game with the RIT players.

Here's the bio that RIT has on their website....


Dave Insalaco enters his second season as an assistant coach for the RIT men’s hockey program.

Insalaco returned to Rochester after spending the last two seasons with the Green Bay Gamblers of the United States Hockey League. Midway through the 2007-08 season, he took over as the head coach and general manager, coaching current RIT sophomores Cameron Burt and Taylor McReynolds, along with incoming freshman Chris Saracino. In 2006-07, Insalaco also coached Tiger assistant captain Sean Murphy.

Last summer, Insalaco coached at the USA Hockey Select Under-17 camp in Rochester with several of the nation’s top collegiate coaches.

Insalaco played two years of professional hockey for the Adirondack IceHawks of the United Hockey League from 2000-02, recording 10 goals and 21 assists for 31 points in 128 career games. He quickly became a fan favorite in Adirondack, winning the Unsung Hero and 110 Percent Award as voted on by the fans in 2001-02. Insalaco helped lead Adirondack to a division title in 2000-01.

The Greece native played collegiately at SUNY Brockport from 1996-00. Insalaco tallied 47 goals and 62 assists for 109 points in 108 career games for the Golden Eagles. He is seventh all-time at SUNY Brockport in goals and 10th in points. Insalaco was an All-SUNYAC second team selection in 2000 and Chase Memorial Academic Athletic Scholarship winner.

“Dave is a young, smart, energetic coach,” said RIT Head Coach Wayne Wilson. “He excels in recruiting, skill development, video analysis and understands the game very well. Dave’s individual instruction with our players has made a big impact with our program.”

In addition, Insalaco’s sister Kim was a member of the 2006 United States Women’s Olympic Hockey Team that earned a bronze medal in Turin, Italy. She is also an assistant women’s hockey coach at Cornell University.

Insalaco lives in Greece with his wife Erica.