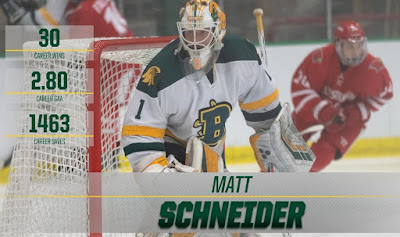 Matt Schneider's NCAA career came to an end this week after 4 years of excellence that saw him become the program's all-time leader in career wins (30) and single season wins (13). His final stats are a .898 save percentage, a 2.80 GAA, a 30-28-2 record and 4 shutouts. He played big in so many games and was unflappable.

To me, his two major highlights were...

1) His freshman year shutout of Plattsburgh at Plattsburgh. That took a burden off the program's shoulders and forever changed how Brockport views a once-unbeatable Cardinals team.


2) The double-overtime loss to Plattsburgh earlier this week. His effort in net was absolutely incredible with so many amazing saves under the most intense pressure imaginable in one of the longest games in NCAA DIII history.

Both of those games are on the short list of all-time games for the Brockport program and there he was in goal for both -- focused and brilliant.