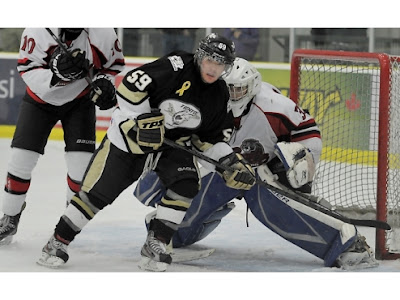 The 20-year old native of Burlington, Ontario is currently in his fourth OJHL season after starting his junior career as a member of the Streetsville Derbys in 2009-10.  The 17-year old rookie would finished fifth in scoring on the club with 37 points in 49 games played and after notching 21 goals and 48 points the following season, Marinac was traded to the Georgetown Raiders for the club's playoff run.  Last seasons saw Marinac join the Cobourg Cougars where he finished second in scoring with 57 points as the club had their most successful season in history despite being upset by Whitby in the playoffs.  Joining the Golden Hawks this season, the speedy forward has thus far notched 19 points in 28 games played for the first place club and is an integral part of their success.