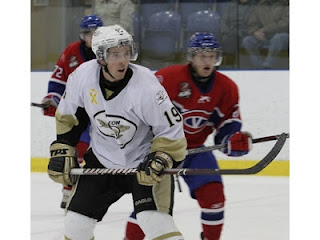 The 20-year old native of Orillia, Ontario would play a single game for his hometown Couchiching Terriers in 2008-09, before joining the club full-time in 2009-10, where he would notch three goals and five points in 42 games as a rookie.

With the team suspending operations during the off-season, Parks would join the Orangeville Flyers, where the intelligent, hard-working forward would team up with head coach Jerome Dupont for the first time.

After improving his offensive output to five goals and 16 points with the Flyers, he would follow Dupont to Trenton, joining the Golden Hawks last year.  Once again upping his totals during 2011-12, Parks had a tremendous off-season and training camp, entering this season on a high note with four points in his first seven games played, before an injury at the end of September that continues to see him out of the Hawks lineup.