ANOTHER GALIANI COMES TO BROCKPORT 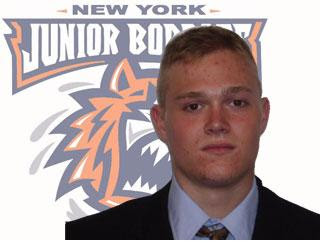 There will be a brotherly connection at Brockport next season. The New York Bobcats junior hockey team announed yesterday that Danny Galiani has committed to Brockport. Here's the Bobcats' press release...


The Bobcats are proud to announce that Danny Galiani has committed to the Golden Eagles of Brockport State College for the 2009/2010 season. Danny will be joining his brother and former Bobcat standout, Thomas Galiani, who is coming off a very successful sophomore campaign for the Golden Eagles. Brockport is a member of SUNYAC, which is arguably the strongest Division III Conference in the United States. Danny becomes the fourth player overall from this year’s New York Bobcats to receive a commitment to play collegiate hockey.

Despite having to combat nagging shoulder injuries all year, Danny had a terrific 08/09 season for the National Qualifying Bobcats. In addition to being one of the team’s captains, Danny played a tenacious and physical game night in and night out. His strong 16-19-35 in 50 games and his role as one of the top penalty killing and back checking forwards on the team made him one of the Bobcats’ most valuable two-way players. Danny’s 8 power-play goals were also good enough for 2nd on the team. His overall contributions were an integral part of the Bobcats success this season, which culminated in an appearance in the AJHL Finals and a trip to Marlborough, MA to compete for the Tier III Junior A National Championship.

By way of background, Danny spent his entire youth hockey career with the Long Island Gulls. During most of that career, he was coached by current Bobcats Coach, Eddie Galiani. Danny is most remembered in Gulls lore for being a member of the Gulls 2004 Bantam State Championship team that ultimately competed in the U.S. Nationals in Pittsburgh that year. In addition to also being a part of the Gulls 2002 PeeWee State Finalist, Danny was the Captain of the Gulls Midget Major team during the 05/06 season. He competed in the Empire State Games for Long Island in 2006 and was invited to the NYS Select Camps in 2005 and 2006. Before joining the Bobcats in the 07/08 season Danny was a key contributor and assistant captain on the 06/07 Suffolk PAL Junior B team, which captured the MJHL Regular Season Championship and earned a berth in the National semi-finals. During that season, Danny was the 20th leading scorer in the MJHL and was named the 2nd Star of the game in the MJHL All-Star game.

Danny has always been known for his strong work ethic and outstanding character and has never allowed anything to stand in the way of his continued growth and development as a hockey player. Playing in a big man’s game, he has consistently allowed his heart, willpower, physical play and strong skating ability to dictate his success on and off the ice.

A strong student, Danny hopes to pursue a career in sports medicine or physical therapy. The entire Bobcats and Gulls communities would like to extend their sincere and heartfelt congratulations to Danny and the entire Galiani family and wishes him the very best as he heads to Brockport State College to embark on his academic and college hockey career.