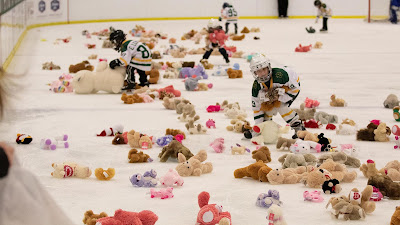 The SUNY Brockport men's hockey team rallied with two third period goals, but it was not enough to overcome an early 5-0 deficit as the Golden Eagles lost for just the second time in their last 11 games on Friday night against Fredonia.  The contest was part of the Golden Eagles Teddy Bear Toss & First Responders Night.  Following Brockport's first goal the Golden Eagle faithful launched hundreds of stuffed animals out onto the ice for collection and distribution to children in need at the Bivonia Child Advocacy Center.

Brockport's record moved to 13-8-1 overall and 6-6-1 in SUNYAC play, while Fredonia improved to 6-9-7 overall and 3-7-3 in league play. Doc Gentzler finished the night with one goal and one assist to lead the way for the Golden Eagles.

The home team earned a heavy shot advantage on the evening (39-21) but they could only capitalize on one of eight power-play chances in the loss.

Fredonia's Jacob Haynes led the way for the Blue Devils as he posted three points on one goal and three assists.  Both of Haynes' goals came short-handed for the visitors.

Fredonia led 3-0 through two full periods of play behind goals from Ethan Kirbis, Haynes and Bryce Witman.  Haynes then added an early third period goal and Antonio Demacopoulos capped the Fredonia scoring as he posted his third goal of the season to hand the visitors a convincing 5-0 lead midway through the third period.

Jeremy Solat got the Golden Eagles on the board with this sixth of the year at the 10:08 marker of the third period. His goal was assisted by Doc Gentzler and Ryan Romeo.

Gentzler then added his fifth goal of the season with just 19 seconds left in the contest to make the score 5-2. Connor Hutchins and Anthony Hora were each credited with an assist on the final goal of the contest.

Fredonia goalie Anton Rosen stopped 37 shots on the evening to pick up second star honors for the visitors.  Brockport's Matt Schneider made 15 saves.