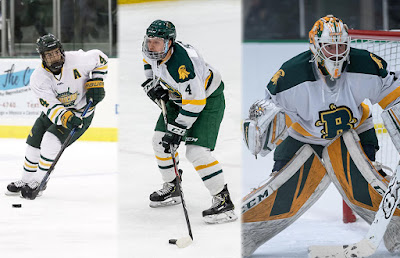 Passero helped the Lakers continue their win streak as they gained two wins SUNYAC wins against Buffalo State and Fredonia. On Friday against Buffalo State, Passero tallied an assist and recorded an on ice rating of +3 in the Lakers 5-0 win. The senior would continue his 4-game scoring streak as he posted a 3-point game (1 g, 2 a) against Fredonia while posting an on ice rating of +2. Passero now leads the Lakers in points with two goals and 12 assists and is tied for first in assists in SUNYAC play with eight.

Defensemen Anthony Hora posted one assist as Brockport traveled to nationally-ranked Geneseo for a key SUNYAC contest on Friday.  Hora now ranks in the top 35 in the nation in both defensemen scoring and rookie scoring with an average of .78 points per contest.

Schneider stopped 27 shots against nationally-ranked Geneseo on Friday. He allowed three goals total, one of which came on a penalty shot midway through the third period.  He also held the Knight to a 1-for-7 effort on the power-play as the Golden Eagles were outshot 31-21 on the afternoon.