From the New York Bobcats of the AJHL.... 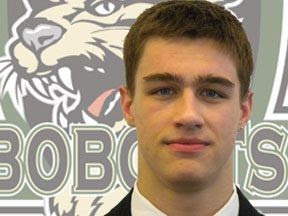 The Bobcats are proud to announce that standout forward, Stephen Sachman, has committed to the Golden Eagles of Brockport State College for the 2010/2011 season. Stephen will be joining teammate Joe Reagan, who committed earlier this year to the Golden Eagles. Brockport is a member of the SUNYAC Conference, which is arguably the strongest Division III Conference in the United States. Stephen becomes the seventh player from this year’s New York Bobcats to receive a commitment to play collegiate hockey.

Known for his strong and quick shooting release, Stephen was considered one of the team's strongest offensive players the past two seasons. Teams left him open in the slot and shooting lanes at their own peril. A two-time AJHL All-Star and one of the league's top point producers, Stephen accumulated some eye-popping numbers during his two-year tenure with the Bobcats. In 126 games, including two National Championship appearances, Stephen scored 63 goals and 53 assists for a total of 116 points, the most for any Bobcat during that period. His 63 goals easily made him the organization's top goal scorer - 17 more goals than the next closest Bobcat. His 30 points also made him one of the team's top power play specialists the past two years, and his 15 game-winning goals far surpassed any other Bobcat.

By way of background, Stephen came to the Bobcats from the Junior "B" Long Island Royals where he was a member of the 2008 National Championship team. That team also earned the MJHL 07/08 Regular Season and League Championships. During that season, Stephen was an MJHL All-Star, earning 3rd Star of the game and finishing 18th in league scoring. In addition to participating in the NYS Select 15, 16 and 17 Camps, Stephen also competed in the Empire State Games for Team Long Island in 2007.

An Honor Roll student every semester in high school and an avid community service volunteer, Stephen has an interest in Business Administration and Computer Applications and hopes to pursue a combination of those areas in college. His work ethic on and off the ice, his character and integrity, and his commitment to both the team and those less fortunate, all speak to the young man he has become today and will serve him well as he heads to SUNY Brockport to commence his academic and college hockey career.